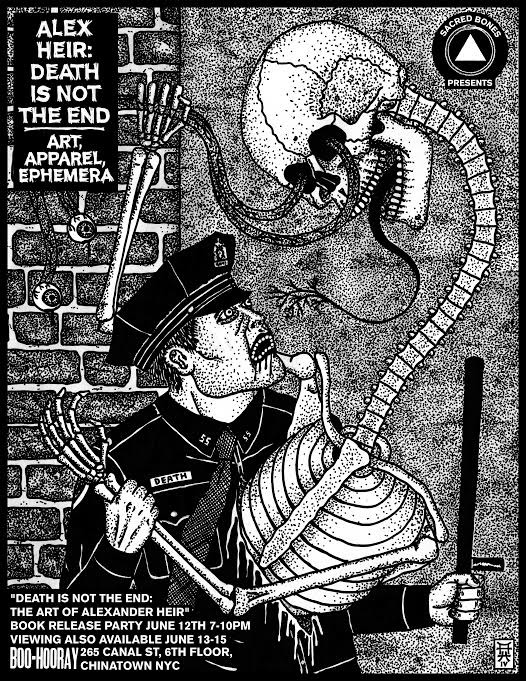 Alexander Heir may not be a household name, but neither are the majority of underground bands whose flyers, 7-inches and physical persons are colored by the notable illustrator's works. Perhaps best known for his clothing line Death/Traitors (worn by punks and hip-hop heads alike), Heir's dark arts have been around for 50 years, and Sacred Bones Books is finally putting it all together in a limited edition collection called Death Is Not the End: The Work of Alexander Heir, with the first press due out June 10 and "slip-cased, foil stamped and pro-printed using a Risograph," according to the press release.

For anyone involved or interested in underground punk, this is an essential piece of music history, spanning Heir's full career and including paintings, album covers and rare pieces either unpublished or out of print. Here's just a sample of his works included in the book that twist humor and perversion into a delightful treat:

Orlando is lucky to have a number of local artists keeping the tradition of illustrated concert flyers alive and well (exhibit A, exhibit B). Here are a couple kick-ass local flyers we've seen recently:

The Attack, Panther Camp, Wolf-Face, Moonmen From Mars at Backbooth 5/23