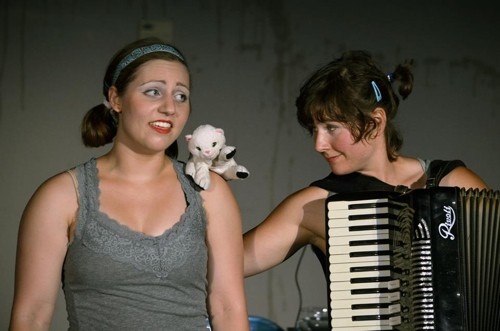 The 100-member chorus line has gone MIA, the spectacular fireworks display has fizzled, and guest star Lady Gaga filed a restraining order, leaving Genie Cartier and Audrey Spinazola all alone on stage. It's a true actor's nightmare, but the show that this genial pair produces in response to the surreal situation -- Genie and Audrey's Dream Show -- is more like a dream you won't want to wake up from.

This winning confection -- concocted from a combination of kid-friendly comedy, endearingly tuneless singing and credible circus arts -- plays like a cross between the Marx Brothers (or Sisters, in this case) and an especially strange episode of Sesame Street. There are bad magic tricks, worse puns, somnambulant tumbling routines and adorably absurd accordion-playing cat puppets.

One memorable sequence starts with Fosse footwork, flows into a goof on The Godfather, and finishes with a first-rate chair-balancing feat that's foiled by an abundance of booty. Other highlights include a meowing toy piano, a musical turkey baster and a moose-motivated nuclear holocaust that's averted by a time-reversing hand-slapping routine (you can't make this stuff up). Interspersed among the silliness are some genuinely lovely interludes, such as a rendition of "Scarborough Fair" on water glasses, beneath the Purple venue's laser-dappled circus tent ceiling.

Genie and Audrey perfectly capture the illogical logic of the unconscious, crafting an entertaining illusion of incompetence that feels like flipping through late-night TV stations with a staticky antenna. The chemistry between the pair, which straddles the line between BFFs and bickering sisters, extends to their interactive relationship with their receptive audience. In the end, this show does generate fireworks; and with the promise that each performance is a little different, this is the first show this Fringe that I want to see a second time.