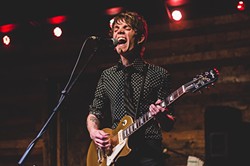 Between the beloved, scene-making legacy of the Heathens and his accomplished solo work, Matt Butcher left a pretty deep impression on Orlando’s indie scene during his time here. From the mid 2000s until 2011 when he relocated to Nashville, he was Orlando’s reigning prince of Americana. However, though his unmistakable image is unchanged, you’d hardly recognize the guy on his recent return visit (May 14, Backbooth).

First, there’s the accent. Did you know he’s an Englishman? Me neither, and I’ve known the cat for years. Well, apparently, he is. Born in Birmingham, England, he’s actually getting back to his speaking roots and, he tells me, is feeling much more in his natural skin again. So don’t give him that sideways look you gave Madonna when she started doing “the accent” the next time you hear him talk.

And then there’s the music. He has a new vehicle called Matt Butcher and the Schoolyard Band, and it’s very much a new chapter. That easy drawl of his is still in effect, but Matt Butcher has gone rock & roll, kids. Yes, this nice, lean trio is a straight-up, old-fashioned, rubber-burning rock & roll band. And to be completely frank, it's a very welcome bit of levity and juice to Butcher's sound. He tells me he's rediscovered the fun in making music and the greatest testament to this new project is that it totally looks and sounds like it. In fact, I've never seen him truly rock on stage before this.

Butcher is known for taking himself seriously. It’s what drove him to hone his craft, adding value and depth to his music. But he has occasionally sagged under his own self-imposed weight. Now in a high-quality good-time band, however, melodrama is a memory. And if it starts to creep back in, he can just burn it all up in a guitar blaze. That's all the more reason to get serious about Matt Butcher again.

Speaking of taking oneself seriously, Conor Oberst – the most emo musician outside the emo genre – played earlier that night (The Beacham). I’ve occasionally dug a Bright Eyes song here and there but maybe I’ve outgrown it. Or maybe, ultimately, Oberst just ain’t my kind of dude. But at least he wound up settling into a more eased groove carved from the more grown-up and timeless bedrock of American folk. And, backed by notable opening band Dawes, the full-band sound was warm and big enough to fill the theater. Don’t worry, all you sensitive hearts out there, Oberst’s characteristic vocal jitter was still holding court with all its broken emotion. There was enough nervy edge to be distinctive and count. It’s just now anchored by a tone that’s more weary than overwrought – a good, merciful thing at this point. If someone would’ve told me during Bright Eyes’ zenith that Conor Oberst would eventually learn how to age with something approaching grace, I would’ve told them to get the fuck outta here. Well, whaddya know?