Location Matters: Reign of the Orlando Superchildren, Part 3 of 4 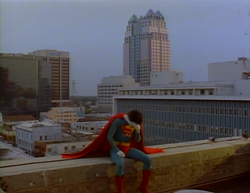 Location Matters is a series that reflects upon pieces of Orlando immortalized in popular film. Today, the third installment of a sub-series devoted to the 1980s Superboy program that was produced in our fair metropolis (view part one here and part two here).

Superboy's producers Alex and Ilya Salkind weren't tied to much canon regarding the nascent Kryptonian they licensed for their syndicated television series. The character didn't appear in any of the Superman movies between 1978 and 1987 and had actually been stamped out of the comics in 1986, a victim of DC's Man of Steel reboot that also erased Supergirl and Krypto the Super Dog. Thus, TV's Superboy was free to venture into whatever weird, uncharted territory his writers could dream up. Putting Clark Kent in the balmy recesses of Florida was strange enough for fans used to seeing the guy inhabit one of three places (bustling urban landscape, Kansas cornfield, outer space), but the oddness cranked up even higher in Superboy's third season. Suddenly Kal-El became an intern for the Men in Black.

Yes, when Superboy returned for round three in October 1990, viewers learned that Clark had accepted an internship with the Capitol City Bureau Office For Extra-Normal Matters. UFOs, Bigfoots, Skunk Apes - Superboy is now in the thick of the very x-files Mulder and Scully would deadpan their way through to national acclaim a few years later. No one in Capitol City's FBI is as steely as their FOX counterparts, though. In fact, Clark's boss is pretty testy, stressed out and overbearing, almost like ... he's running a newspaper. The office interior certainly smacks of art deco, as if The Daily Planet existed there during Roosevelt's heyday. And for a government building, there doesn't seem to be much security. Lana Lang breezes right in with her bad self for the other internship position the show has decided she must have. Letterman faced more opposition when he tried to deliver that fruit basket to GE.

A sweeping shot of downtown Orlando at daybreak kicks off season three's first episode, but before you can say Church Street Station a radio announcer makes clear the skyline belongs to Capitol City.  This actually doesn't violate anything from previous seasons since Superboy never makes anything clear about Shusterville's borders. It's entirely possible the downtown locations we've already seen were always meant to be a part of this new fictional burg (though oddly it is later revealed that Orlando exists in this small screen universe and it's a "long way" from both Shusterville and Cap City).

Coincidentally, a month later The Simpsons introduced their own Capitol City in the now classic "Dancin' Homer" episode of that show's second season. Tony Bennett lends his soothing vocals to "Dancin' Homer," welcoming the Simpsons to their new home in a neighboring municipality with a funny song and a friendly word. Meanwhile, Superboy's Capitol City is populated by none other than Gregg Allman, who as a seedy carny sniffs about one of his victims to Superboy, "She was askin' fo' it, and lemme tell ya somethin' else ... she was lovin' it!"

Despite the fact this Bureau For Extra-Normal Matters angle ostensibly affords Superboy the opportunity to confront the Loch Ness Monster or figure out Roswell, a lot of the time he's still tussling with petty nobodies (most of whom, granted, are imbued with "mystical powers") and his old nemesis Lex Luthor. That's fine, though, because season three is where Superboy finds secure footing in its overall production. The growing pains are over; smarter writing, tighter editing and more stylized cinematography add up to a program that's both more self-assured and endlessly fun. Even when Super clone Bizarro is terrorizing the city because he's desperate to be in love and Luthor somehow twists this into creating an army of exploding pigeons it's hard to turn away, because they've finally figured out the formula to sell it.

Also, even with an extra 30 minutes an episode, it doesn't seem like the heroes of The X-Files ever really got to the bottom of the big mysteries they tackled. That show ran for nine seasons and threw out two movies and the ultimate fate of Mulder's sister is still ill-defined at best. All we know for sure is that the rapper Xzibit is in the second X-Files movie, but the first one is where a bee sting forces Mulder and Scully to get it on. 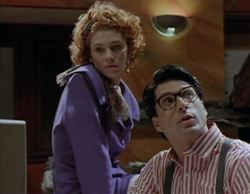 If there's any aspect worth kvetching about in Superboy season three, maybe it's our hero's hair. It appears Gerard Christopher struggled with Florida humidity (or he just didn't want to get a trim) because from time to time those Kryptonian follicles are seriously unkempt. Of course, a big part of the Superman mythos is that Earth scissors can't cut his hair, he has to use special space scissors or his heat vision or both and it's just a big hassle, so maybe he just lets it grow out occasionally. While we're on the subject, Stacy Haiduk went with the Caroline in the City 'do for season three. It's cute but also tends to scream "HEY REMEMBER THE FUCKING NINETIES?" at the top of its spunky lungs.

Superboy was still filming at Universal Studios Florida in 1990-91, both on sound stages and around the newly opened theme park. In more than one episode characters are seen traipsing around the latter's tiny crevice of street blocks made up to look like early 20th Century Manhattan. One outing even works Universal Studios into the plot; in "Werewolf," Clark's boss rewards him for improved job performance with two passes to the park so he can "ride the movies." Our boy takes in Earthquake! The Ride and some fries at Mel's Drive-In before his alluring date turns into the titular monster for a showdown that pays homage/shamelessly copies the end of American Werewolf in London (a proud Universal property). The only thing missing is a cameo from Jenny Agutter or Rik Mayall or David Naughton or Griffin Dunne.

Truth be told, this season might be the record holder for nuttiest guest stars. In addition to the aforementioned Gregg Allman, we're also treated to Wayne Brady (in his first screen credit) as a member of a cult of levitating fire-starters ("Sons of Icarus"); wrestler Larry "Lex Luger" Pfohl, who plays an evil blonde version of Superboy who terrorizes Clark in his dreams ("Mindscape"); celebrity biographer Wendy Leigh as Sally Jesse Raphael parody Judy James Donatello ("The Bride of Bizarro"); and Edgar Allen Poe IV, the alleged great-great-great-grand-nephew of the original E.A. Poe, as a derelict ("Roads Not Taken"). This is actually not Poe's first appearance on Superboy, nor will it be his last - he pops up as a minor character in season one ("Mutant") and materializes again in season four as Lex Luthor's father ("Know Thine Enemy"). For reasons only he understands, Ed is credited as Poe III during season three but Poe IV everywhere else.

Oh, did I mention Juice Newton? She shows up as well during Superboy's take on Jekyll and Hyde ("Jackson and Hyde").

1990 was a time of renaissance for comic book heroes. The prior year's long-awaited Batman film touched that off; suddenly anyone born from ink (the Flash, Captain America, Dick Tracy) was getting their own live action property. Superboy had been ahead of the game and was able to work out its kinks before this new superhero heat descended. As ratings and critical praise piled up, the Salkinds began seriously considering using their TV property as a possible platform to relaunch Superman on the big screen. Following the disaster of 1987's Superman IV: The Quest for Peace it seemed unlikely Christopher Reeve would sign on for Superman V. Gerard Christopher could step in, the producers reasoned, and the sequel concept slowly morphed into Superman: The New Movie. Kal-El might be reborn of a new canon, soaring above his crummier mid-'80s installments to stand shoulder-to-shoulder with Keaton's Batman.

Warner Bros., who owned the character of Superman outright, weren't so optimistic. They didn't see the Salkinds as successful television producers; rather, they saw them as the guys who drove the Superman film franchise into the ground, the stubborn pair whose warring with original talents Richard Donner, Gene Hackman, and Margot Kidder hampered the second and third Super screen installments and forced the sale of Superman IV to notorious cheapskates Cannon Films (who gave us a Man of Steel barely fit for a boat show). The Salkinds' Supergirl fared no better, bellyflopping upon its 1984 release. Warner had allowed the Salkinds to play with their Supers for over a decade. Now it was time to hand things over to new blood.

Superboy was about to enter the Phantom Zone, both figuratively and literally, where he would languish for over a decade as if he never existed at all.

Next week: the thrilling conclusion of REIGN OF THE ORLANDO SUPERCHILDREN! Watch in horror as the corporate masters debilitate our hero with legal red tape! Gasp loudly as a safety from the Buffalo Bills steps into the tights for a network retread! Feel some kind of way when Gerard Christopher starts selling bootleg Superboy DVDs from his website! The incidents! The places! My friends, we cannot keep this a secret any longer. Can your heart stand the shocking facts of Superboy robbers from inner Hollywood?