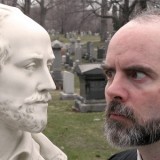 For the second consecutive year, Montreal’s Keir Cutler is offering one of the smartest, most thought-provoking shows at Fringe. Adapting the 1909 book Is Shakespeare Dead? by Mark Twain, Cutler – using Twain’s trademark intelligence and wit  – makes the strongest argument possible that William Shakespeare of Stratford-upon-Avon did not write the works credited to him.

This is no stodgy period performance of Twain. Instead, it’s Cutler himself – attired convincingly in formal lawyer’s garb – painstakingly making the argument to us, the jury, not just that the greatest collection of works in the English language were written by people (yes, more than one) other than Will, but that we’re essentially “surmisers” and “troglodytes” who have been tricked into believing a laughable myth, although it’s worth noting that Twain himself viewed his book as part satire.

This reviewer has neither the time nor credentials to fully refute Twain, except to note that facts, even when correct on their face, can be woven together in such a way as to present inaccuracy. In addition, Twain argued that there was no ironclad evidence linking Shakespeare with the authorship of his plays, while, of course, the same can be said of Francis Bacon, Chris Marlowe, Ben Jonson and the other alternates. But, without a Shakespearean scholar to mount the stage upon Cutler’s exit and take to task Twain’s claims, one must admit that his arguments are breathtakingly convincing and will leave you scrambling for your history books to verify what you’ve just heard.

That Cutler’s show provokes us and challenges our cherished assumptions is a credit not just to the genius of the works of Shakespeare, regardless of who penned them, but to Cutler’s command of his topic and his audience. The production is not quite as polished or powerful as last year’s Teaching Shakespeare, but it’s still one of the few must-sees of the festival. And though Cutler skewers Shakespeare the man, it’s to his credit that he fully embraces the canon.

I conclude with a comparison that has little to do with this production and is not intended to full counter Twain’s arguments, but is simply food for thought. Take the Beatles. Like the Bard, they didn’t study under the greatest masters in their field, they weren’t well traveled, they weren’t able to draw upon years of life experience, and they didn’t have extensive higher education. Paul McCartney, arguably the most talented of the group, never even learned to read and write music. Yet, in just a few short years, these young men were magically able to acquire the talent and knowledge capable of producing the greatest popular music of the 20th century, and perhaps of all time.

Surely more experienced and better educated musicians created that music! Or maybe the Beatles were in the right place at the right time, surrounded themselves with the best and smartest people they could find, worked tirelessly – and were geniuses. And maybe, just maybe, the same is true for a guy named William who hailed from a small town 130 miles southeast of Liverpool.