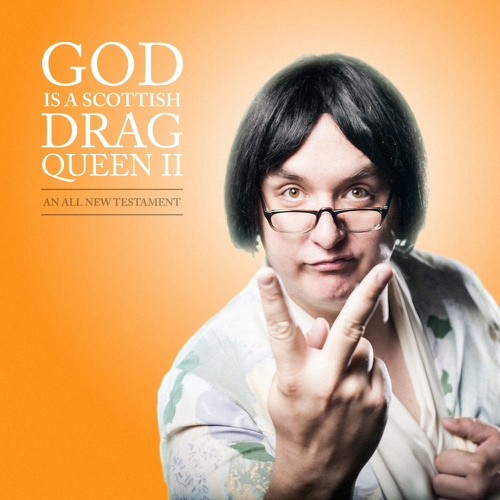 God Is a Scottish Drag Queen II at 2104 Orlando Fringe

God Is a Scottish Drag Queen, the runaway comedy hit of last year's Orlando Fringe, has returned with another All New Testament, and if it isn't quite the Second Coming then it's the next best thing (and that's saying something, coming from this Jew). Mike Delamont has returned to strut and schvitz again on Shakes' Goldman stage in a smart floral power suit, slinging razor-sharp opinions on everything from religion and sex to movies and shopping malls, at a pace that will leave you panting for breath between laughs.

No worries if you didn't see Part 1, since there is no plot continuity or character backstory to catch up on, beyond the conceit that Delamont's burly bewigged presence is the Lord's idea of an image update. The script is loose, to say the least, as Delamont provides a series of subjects but also riffs on topics suggested by the audience; the show doesn't so much conclude as inevitably run out of time, leaving the audience begging for more.

I enjoyed this year's satirical sermon every bit as much as the original, from the mocking video commentary on the Fringe preshow announcement, to the South Park-worthy takedowns of Mormonism and Scientology. In the interests of full disclosure, I must note that at Saturday night's premiere performance, a rant about Cain and Abel's often-overlooked sibling Seth ("sounds like a gay snake") led the Lord to repeatedly single me out in my front-row seat. Delamont quipped that I could get my revenge in this review, but I've no complaints; now I can tell people I'm on a first-name-basis with God Herself!

GOD IS A SCOTTISH DRAG QUEEN II: AN ALL NEW TESTAMENT