Orlando Fringe Review: The Death of Brian: A Zombie Odyssey 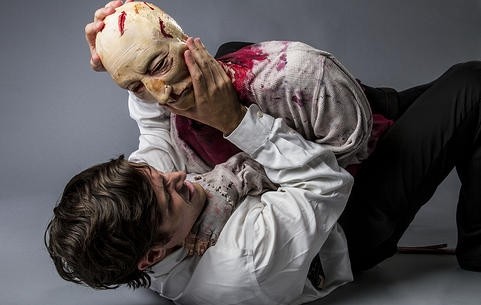 The Death of Brian: A Zombie Odyssey at the 2014 Orlando Fringe (Photograph courtesy of Kasandra Kincaid)

When Brian (writer-performer Ricky Coates) first shuffles onto the stage, blankly watching TV while his wife harangues him, you may think he's undead already. But it isn't until a car crash ends with Brian awakening naked in the hospital morgue that The Death of Brian: A Zombie Odyssey accelerates into uncharted territory. Unlike many of the zombie-themed shows that have proliferated at Fringe in recent years, The Death of Brian takes its subject surprisingly seriously, presenting the start of the ghoul apocalypse from the flesh-eater's point of view with both mordant humor and an unexpected depth of feeling.

Under the direction of K. Brian Neel, Coates gives a gut-munching master class in physical commitment, baring himself (literally and figuratively) as he beats himself senseless, suffers shock therapy, zips himself into a body bag, and hobbles around on a shattered ankle. Longtime living dead fans will love the subtle references to Romero's films, like the Goblin-esque synthesizer soundtrack and mention of the Monroeville Mall, and there are enough grisly gore effects to make Tom Savini smile.

Brian's quest to reconnect with his wife (an allusion to the Ulysses myth) gives his saga motivation beyond the usual "eat brains" motif, with an elegiac ending setting up the Julius Caesar-inspired second episode in this planned trilogy. My only quibble is that Coates' grounded, honest performance is somewhat undermined by the muffled, cartoonishly overacted voice-overs representing all the other characters that he interacts with. If, like me, you've seen Dawn of the Dead a couple dozen times, you definitely don't want to miss this emotional intestine-eating epic.

THE DEATH OF BRIAN: A ZOMBIE ODYSSEY