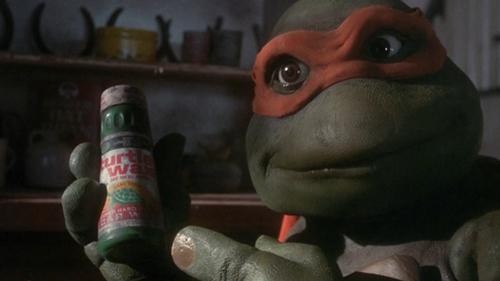 There are certain films that perfectly define childhood for those who were at the right age at the right time. The Wizard of Oz. Star Wars. Back to the Future. And, yes, Teenage Mutant Ninja Turtles.

The first movie I was ever taken to see was Return of the Jedi. The first movie I vaguely remember seeing was Back to the Future II. But the first movie that I remember the entire experience, from the bus ride there, how hot it was in the theater and the amazingness of the film, was Teenage Mutant Ninja Turtles. It's camp and gritty and was the most quotable movie of the very early 90s, from the cowabungas to the bossanovas (and the Chevy Novas) to Mikey and Donnie's every word spoken in the 93 minute runtime (A fellow 'chucker, ey? Pork rind? Pork rind).

What's more is that it holds up, unlike so many other childhood films. In fact, as I watched it over the winter, I thought it may actually be better now. I was old enough to get all of the jokes and all of the references that I missed when I was a kid. Raph's moodiness speaks to me in a way that it didn't when I was younger, and I'm old enough to full appreciate everything that Elias Koteas brings to the screen.

A few things to keep an eye out for:

Better learn the lyrics to this too:

The show begins at 8pm. See Enzian's site for directions and details.