Location Matters: Reign of the Orlando Superchildren, Part 4 of 4 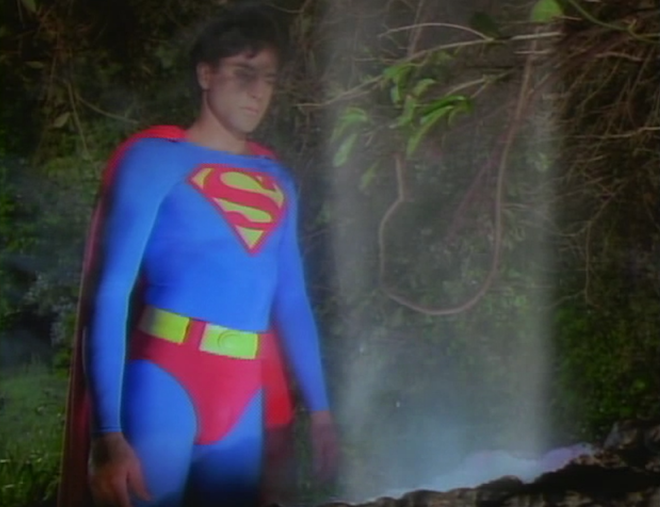 Location Matters is a series that reflects upon pieces of Orlando immortalized in popular film. Today, the fourth installment of a sub-series devoted to the 1980s Superboy program that was produced in our fair metropolis (view part one here, part two here, and part three here).

Season four of Superboy (Oct. '91 - May '92) is where this series stops being polite and starts being real. In "Threesome: Part 2" (the title of which refers to a trifecta of villainy, not anything prurient) the Kid of Steel has to physically stop a farmer who has gone broke from blowing his head off with a shotgun. "Know Thine Enemy" allows Supes to enter Lex Luthor's memory bank as Lex, where he experiences firsthand the merciless physical abuse Luthor and his younger sister endured as children at the hands of their father. An exceptionally gross moment comes early in "The Kryptonite Kid" when a scientific whiz suffers through a lab explosion and we see liquid kryptonite seep into his open wounds. Literally, the stuff oozes right into his cuts as he moans in agony! Who wrote this stuff, Hellraiser?

Actually, these darker "true to life" moments (come on, don't act like you've never accidentally fused an intergalactic polymer to your bloodstream) are a welcome flourish. They make up for some of the continuity issues that stick out in Superboy. TV was a different animal twenty years ago --- the emphasis we see these days on multiple season story lines and plot points was almost nonexistent, especially in syndicated programs. Shows like Superboy aired at different times in different markets throughout the country on channels people were just discovering they could receive. There was no DVR or instant streaming or any one collective data bank where programs could be accessed, and it would be almost cruel to viewers to produce something that relied heavily on previous episodes for setup and continued drama. That said, TV viewers in the '90s surely weren't brainless troglodytes, and the fourth season flushes a couple very important moments down the toilet for not much good reason.

For instance: in the previous season, aliens posing as Superboy's biological parents from Krypton show up to lay out the fantastic narrative that brought Kal-El to Earth. Even though these aliens turned out to be evil non-Kryptonians, everything they relayed to Supes about his origins was true, and he finally knew for sure he wasn't some secret Nazi war experiment gone awry. In this round, Superboy revisits the hero's journey to our universe, but when Clark sees a hologram of some Kryptonian gatekeeper bearing his chest symbol, he's like, "What? I'm from another planet?" Yes, dumb dumb, of course you are! Were you high last year when the aliens explained it?

More egregious is the way they go back on what could be considered season four's biggest turning point: in "Who Is Superboy?", Lana Lang finally confronts Clark about why he's never around when Superboy is, and vice versa. She really presses him, he begs off, and right before a convenient piece of technology is set to prove Superboy's secret identity, the two share a very gentle and honest exchange that prompts Lana to shut off the machine. Then, with a passionate kiss, Lana infers to Clark that she accepts if he isn't comfortable being "out" yet and that she will support him regardless. It really is one of the series' best moments, in terms of writing and execution...and a mere two episodes later this pivotal exchange is forgotten. While investigating a half vampire half wizard who owns a gym ("Rowdy" Roddy Piper) Lana asks Superboy if he's seen Clark that day with absolutely no suggestive inflection, and he answers as if they are both still confident this Clark Kent is an entirely separate person.

Superboy actually has Lana confront Clark about his secret identity a second time, in this season's final two part episode; she literally tries to needle it out of him with a sewing needle whether he likes it or not. There is no tender moment of shared understanding as before, no vulnerability or wordless expressions of support. Just clumsy "Oh, I'm gonna prove you're the guy!" from a childlike Lana and the Superdude responding in an equally tone deaf manner. The climax arrives when Superboy, alone with Lana in a misty patch of woods, swaggers, "Would Clark ever do this?", shoving his tongue into her mouth and almost through her cheek. Lana smiles afterward, her expression reading, "Yo, I got some Super play!"

Credit where credit is due: the Superboy team did a great job making Osceola County's St. Cloud look like the Kansasy confines of Smallville, where the action moves for several episodes. For a hot minute my mind held no doubt they ferried the production to the Jawhawk Nation until I did a little Google imaging and confirmed the St. Cloud VFW stood in for Smallville's bus station. Side note: would master criminal Lex Luthor really spend twenty goddamn hours on a bus from Florida to Kansas? That seems unreasonable for a guy who always has access to nuclear weapons or kryptonite or advanced robotics. 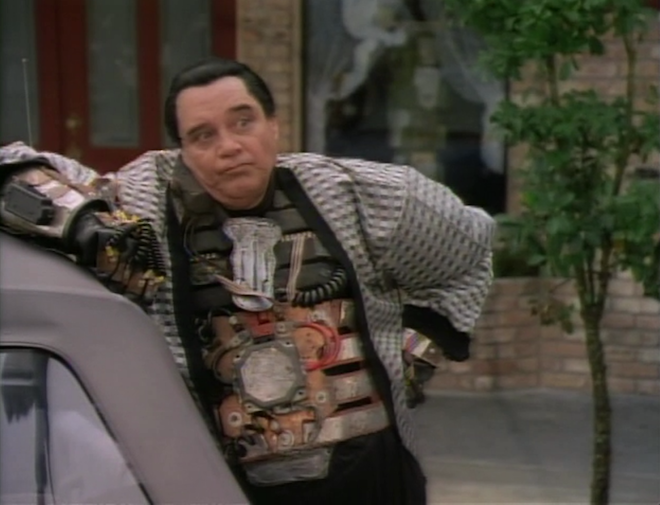 The season draws to a close in Smallville; in the aforementioned misty patch of woods, just before Lana shows up, Superboy messes around with some sacred outer space crystals that help him "reach maturity." This is Superboy's way of saying our hero is now Superman, since they could not legally use the name "Superman" in this context. Producers Alex and Ilya Salkind were ready to graduate Gerard Christopher, though, and their plan was to either launch him on the big screen in Superman V (pending the expected disinterest of Christopher Reeve) or to start churning out made-for-tv Superman movies. One theory suggests the episode "Obituary For A Super Hero" was originally penned as the Superboy finale (instead of actual finale "Rite of Passage") wherein Luthor would appear to kill Superboy, his resurrection to come and be explained in the first following film property.

Unfortunately, whatever plans the Salkinds had to take Gerard Christopher (who by this time had proven himself to the extent that he was getting producing credits on Superboy episodes) to the next level were quickly stomped out by master Super owners Warner Bros. Dissatisfied with the direction Alex and Ilya had taken the Last Son of Krypton and his satellite properties, the WB not only refused to renew the Salkinds' lease but placed an intellectual property lien against them. Feeling unfairly barred from further exploitation of the red S (and apparently with nothing else on their plate), Alex and Ilya decided to fight the lien in court. The battle dragged on for the rest of the 1990s and halfway into the 2000s.

Ironically, Warner Bros. agreed with their agitators on one major count: some version of Superguy belonged on television. Around the same time the corporate giant decided to stave the Salkinds a new program was put into development that would explore Clark Kent's first year(s) in Metropolis. Lois & Clark: The New Adventures of Superman debuted on ABC almost a year after Superboy's final 1992 episode and made household names out of stars Teri Hatcher (Lois) and former Princeton student/Buffalo Bill safety/Brooke Shields boyfriend Dean Cain (Clark/Superman).

Interestingly enough, Gerard Christopher landed an audition for the latter half of Lois & Clark, managing to keep his most recent job a secret from the casting folk. According to Gerard, the show was ready to hire him on the spot when someone flipped over his headshot and noticed the Superboy credit. He was immediately disqualified, as Lois & Clark wanted a fresh start. Perhaps an even larger bummer for Christopher: as the Salkinds' case against Warner Bros. progressed, all existing Superboy episodes were taken off the market until further notice. The program was erased from television/existence, placed in suspended animation until the justice system could determine what to do with it. No one had any idea the case would drag on until 2005. For a big chunk of that time, Gerard Christopher had no way of proving his most famous role (aside from selling bootleg copies of Superboy episodes created from the master tapes he possessed, which Christopher hawked from his website circa 1999 until the legal mess was sorted six years later).

Still, you can't keep a guy that handsome and charismatic down. Gerard rebounded on the likes of Silk Stalkings, Sunset Beach, and even Melrose Place (where original Superboy John Haymes Newton also did some work). Stacy Haiduk didn't have much trouble finding post-Superboy work either, racking up credits on Parker Lewis Can't Lose, SeaQuest DSV, Charmed, X-Files, Nash Bridges, All My Children, Young & The Restless, and True Blood. Sherman "Lex Luthor" Howard's career kept on truckin' as well, and while the majority of the world probably remembers him best as Elaine's beleaguered ex-boyfriend Roy in the Junior Mint episode of Seinfeld, to legions of horror fans Sherman is most cherished for his earlier turn as Bub the Zombie in George Romero's Day Of The Dead.

While it offers plenty of inspiration fun, the '88-'92 Superboy series is not the greatest telling of Clark Kent's story (that would be Richard Donner's original '78 Superman movie). It's also not the longest-running television show to be produced in Orlando (the Mickey Mouse Club revival of the same era beat it by three seasons). However, it is our Super property to behold, warts and all. Only we can say Bizarro has wept openly in the shadow of our SunTrust Center. Only we can say Superboy apprehended a crazy priest who was punching ice cream vendors into Lake Monroe. Only we, as proud Orlandoans, can loudly brag that Mr. Mxyzptlk haunted our UCF campus with his twisted Brooklynese and weird tufts of hair. They can't claim such in San Jose or El Paso or even Yakima, Washington!

Besides, no matter how low rent Superboy gets, at no point does it come close to the abysmal depths of NBC's 1979 stillbirth Legends of the Superheroes, nor is it ever as utterly confused and unlikable as Seth Rogen's 2011 Green Hornet. As far as general comic book properties go it is miles away from the neighborhood of worst (some even claim it superior to Lois & Clark, which I'll believe only because that show let Howie Mandel of all people take on the role of Mxyzptlk).

Also, tempting as it may have been, Superboy never resorted to jamming Batman or any other Justice Leaguers into its universe. That speaks to a certain integrity absent from current Kryptonian properties.

And so concludes REIGN OF THE ORLANDO SUPERCHILDREN. We hope you've enjoyed this extended lollygag down the somewhat dusty streets of an oft-neglected Super property. Remember: the next time you see a flash of blue and red near Church Street Station, don't immediately blame the "goodie bag" you picked up on I-Drive --- you might just be witnessing the return of our Superboy, who continues to light our souls with his never-ending fight for truth, justice, and higher FCAT scores! 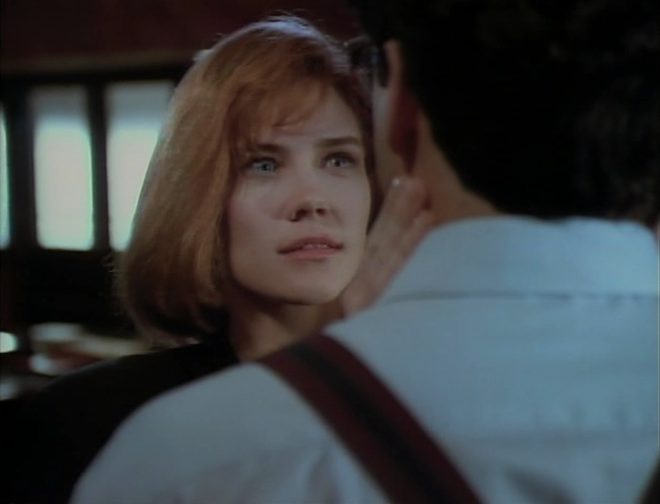