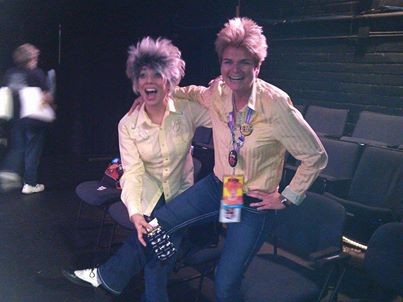 Wait, which one is Patty Sheehan? We can't tell anymore.

One of the sad moments of Fringe 2014 was the fact that we weren't able to review Escape From Baldwin Park – since its author, Steve Schneider, was an Orlando Weekly contributor or full-time staffer for about 19 years, it was nigh-on impossible to find one among our numbers without a conflict of interest. But I can say that I enjoyed it immensely, and judging from the flop-in-chair hysterics around me, either I attended a performance full of asthmatics or I wasn't alone in laughing so much that I probably missed roughly 15 percent of the jokes.

Schneider and a cast/crew of talented locals bring to life an Orlando-ized parody of Escape From New York, jammed wall-to-wall with hyperlocal references (above, see Commissioner Patty Sheehan with her doppelgänger, played by Maria Ragen). The play's quick-witted, I-tease-because-I-love humor will be familiar to readers of Schneider's work here (which includes a sklertillion film and movie reviews, the long-running column "Dog Playing Poker" and his current weekly cultural commentary, Vision Thing). But under the ping-ponging allusions and gags, beneath the roasting of sacred cows and bursting of politically correct balloons, Escape From Baldwin Park asks some hard questions, according to Schneider.

"Despite our living in a society that’s allegedly based on freedom of mobility, how and where we live are largely decided according to the utter whim of strangers far more powerful than us," Schneider believes. (He told us so.)  "In the face of that sort of powerlessness, Escape From Baldwin Park asks: What is a community? Who gets to decide? Is it something that’s made for us, or is it something we make ourselves? And how?" (Pretty heady stuff for a show that features a squirrel cabbie driving a cardboard cab!)

Just a brony hailing a cardboard cab driven by a squirrel, NBD.