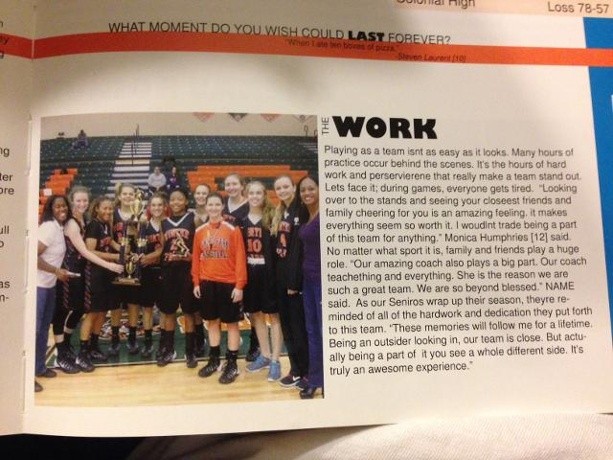 It seems that 2014 has already proven disastrous when it comes to high schoolers and their yearbooks. Not only has a Utah high school altered female students’ pictures without their permission, but Orlando’s own Winter Park High School has now created a yearbook so shockingly awful that the school’s principal has offered to release a corrected version on DVD.

The yearbook, which features golden phrases such as “Our coach teachething and everything” and perplexing spelling errors like “perservierene” and “aquring,” is best described as a grammatical train wreck. Concerned citizen Randy Noles writes, “I saw not only typos but spelling errors and misused words on pretty much every page,” and that he also “would like to see (the school) revive journalism and restart the newspaper.” Either Mr. Noles is extremely forgiving, or his hopeful enthusiasm has placed him in a state of self-inflicted short-term amnesia.

All of this yearbook chaos raises the question: Is the horrendous final product the fault of the school’s lax academics? Or is the student body purposely spelling students as “studnets” to protest the existential decay and superficiality of high school in America?

For now, superintendent Ana Diaz calls the occurrence “unfortunate” and principal Tim Smith aims to “improve the product for next year.” However, be on the lookout for Winter Park High’s new school paper, “The Studnet Times,” due out in the following academic semester.