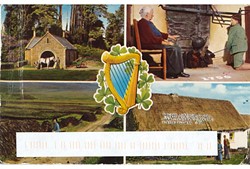 Scenes of Irish life circa 1947 as depicted on the mailing. Photo via Peabody Auditorium.

Note to snail mailers: when sending out your materials please make sure the address you're mailing exists. That's what seems to have hampered the delightful postcard a party known as the Beards sent their pal Dolores Callahan c/o Daytona Beach's Peabody Auditorium. "Thought you'd enjoy these scenes from ole Ireland," the Beards wrote. "We are cruising Irish Sea now in a ferry — great." Unfortunately, in June 1947 the Peabody was still being rebuilt in the wake of a fire that leveled the original building. The new location didn't open until 1949. Confused, Uncle Sam halted delivery and the card ended up bouncing all over creation (the most recent postmark is San Francisco).

The Peabody Auditorium finally received their Irish mail from the Beards on May 13. Hey, better late than never, right? The postcard will be on display this June during Daytona's Hippiefest Street Festival. Check it out to get an up close look at penmanship from the 1940s. Look at the way they wrote the letter "y" back then! Weird!