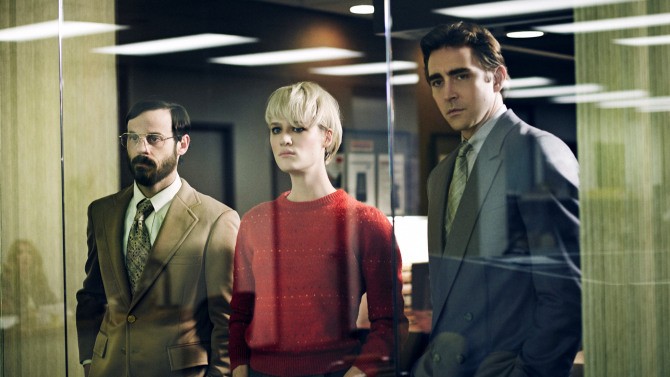 The history of computers on the big or small screen bears little resemblance to the reality of computers. A few films like The Social Network, Underground and The Pirates of Silicon Valley aside, too many directors go for the cheap way out and try to dramatize computing beyond all concepts of reality. The worst offenders, like The Net and Hackers, are so laughably wrong about the way the subculture works that they've become more valuable for irony's sake than anything else.

Maybe the best thing about the series pilot for AMC's new drama Halt and Catch Fire, is that there is no movie bullshit in it at all.

We are not invited into a world where the circuit board is a model city, where we are an electrical current riding the rails to the file being called up. There are no graphics being projected onto anyone's face to heighten the idea of "hacking". No one drops a logic bomb to gain root access through the Gibson's GUI backdoor loophole protocol.

The series takes place in the 80s, a time when IBM was firmly in place as the industry leader in computing, when Jobs and Wozniak were still at Mac who had their niche market, and Gates and Allen had yet to send the computer into mandatory status with Windows 95. Big Blue play the villains of the piece, which plays out an elaborate rouse by a slick hustler named Joe MacMillan (Lee Pace) leads an trod upon engineer, Gordon Clark (Scoot McNairy), to do the unthinkable: clone a PC.

In the pilot's biggest set piece, Joe and Gordon sit in a garage and transcribe 65,000 lines of hexadecimal code that the IBM BIOS is written in. IBM catches wind of the dastardly intellectual property violation and threaten to sue the company they work for, Cardiff Electronics, a mid-tier Silicon Prairie computer company led by Toby Huss (aka ARTIE. The strongest man... in the world).

In a strange legal gambit, they may actually be able to get away with it as long Gordon and Joe can prove they haven't shown the hex code to anyone, which is where Cameron (Mackenzie Davis), a punky, bored comp-sci major who is smarter than the curriculum comes in to save their asses.

If all that sounds boring, it's only because it's impossible to convey the silky smooth style and tension that the showrunners Christopher Cantwell and Christopher C. Rogers build up to. Cracking the IBM motherboard is exciting as it plays out. The schlubby Gordon is an engineering whiz who is had been defeated by the failure to launch a system he and his wife, Donna (Kerry Bishé), designed, and as he picks apart the circuit board with his oscilloscope you can see the blood come back into his face. The excitement becomes contagious as they get closer and closer.

If the show has anything earmarked for a potential breakout element though, it's Cameron, who doesn't get nearly enough screentime in the pilot. Davis plays her tough and sarcastic, much the same way Katee Sackhoff played Starbuck in the early Battlestar Galactica episodes, and her half new wave/half punk style only adds to that edge. She is fiercely independent, maybe because she's surrounded by idiots. Even though she signs on for the job, Joe and Gordon still have to prove that they're something more than typical. They have to prove it to us too, but they make a good start at it.

Halt and Catch Fire premiers on AMC June 1 at 10pm.