After months of rumors and speculation, a press conference was held in a run-down former go-kart track off International Drive to confirm that the "world's tallest roller coaster" is on its way to Orlando. Skyplex is the name of a new entertainment complex to be constructed between I-Drive and and Canada Ave, which will have a first-of-its-kind 570-foot-tall Polercoaster -- dubbed the Skyscraper -- at its center.

Many details about the project -- including exactly what shops or restaurants it will host, when exactly it will open, and how they will handle any increase of traffic on already congested I-Drive, are still (quite literally) up in the air.

Here are the details we do know from today's announcement event, which featured ride designer Bill Kitchen making a dramatic arrival in a helicopter: 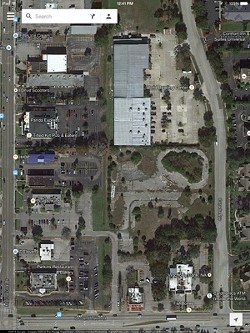 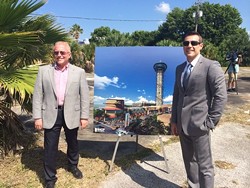 US Thrill Rides' Bill and Michael Kitchen with the Skycraper concept art.

Details from the Skyscraper concept art.

After the press conference, I went up in a helicopter to survey the site. Here are some images captured at 550 feet, approximately the height riders will be during their first inversion on the Skyscraper:

Aerial views of the future Skyplex