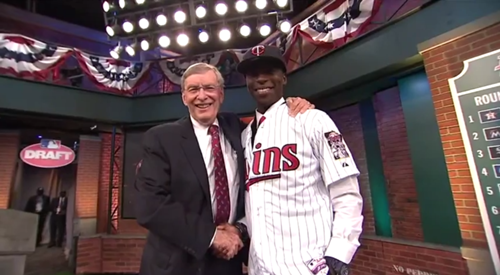 Nick Gordon, son of former major leaguer (on of my favorites ever), set-up man Tom "Flash" Gordon, and brother of LA's second baseman Dee Gordon (who is having an incredible year for the Dodgers and my fantasy team) was picked fifth overall at the MLB First Year Player Draft yesterday by the Minnesota Twins. Gordon is a shortstop from Olympia High School in Orlando and comes from an incredible baseball pedigree. Here is his scouting report: Gordon is talented enough to follow in the footsteps of either his father Tom, a former All-Star pitcher, or his brother Dee, an infielder with the Dodgers. Gordon looked good on the mound during last summer's showcase circuit, throwing a low-90s fastball and a good curveball, but he prefers to play every day and has pitched only sparingly this spring. Gordon has the actions and arm to stick at shortstop, and his plus speed plays well on the bases. He has a solid left-handed swing and uses the whole field to hit. He's made some strength gains this spring, but will need to add more muscle to hold his own against big league pitching. In a Draft class that's weak on shortstops, Gordon has established himself as one of the best. He is committed to Florida State.

https://www.youtube.com/watch?v=F2_kJwAQ2_4 Also taken in the third round, 92nd overall by the Kansas City Royals was UCF's Eric Skoglund, a left handed pitcher from Orlando. Here's his scouting report: A tall, lean left-hander, Skoglund has excelled since becoming the Friday night starter at Central Florida this spring. Skoglund's fastball sits around 90 mph with riding life. His slider and changeup give him two more average offerings, and he knows how to use all three pitches effectively. He has improved his control over the past year and has no problem throwing any of his pitches for strikes. Scouts can still project on Skoglund, who is listed at 6-foot-6, 170 pounds. He has an easy delivery and could still add some velocity as he fills out his large frame. Even without any added velocity, he has the tools necessary to be a Major League starter.

Such a blessing to be drafted and be apart of the @Royals organization! Now the journey begins!

Taken 103rd overall, in the third round by the Boston Red Sox was Edward Cosart, a RHP from Seminole State in Sanford. Cosart also has a baseball pedigree, and is the younger brother of the Astros's Jarred Cosart. Here's his scouting report: The younger brother of Astros right-hander Jarred Cosart, Jake began his college career as an outfielder at Duke. After red-shirting last season, he transferred to Seminole State, where he has found a home on the mound. Like his brother, Cosart has a powerful right arm. His fastball tops out at 98 mph with good natural life. He mixes it with a biting curveball that can be a swing-and-miss offering. His changeup is in its nascent stages, and its development will be the key to his future. Some scouts see Cosart as a future reliever, where he would have less of a need for a third pitch and his aggressive mentality profiles well. But his raw tools, projectability and athleticism likely lead the team that drafts him to develop him as a starter.