World Cup 2014, Brazil: one week out from the opening kick off and the commercials are still the best thing 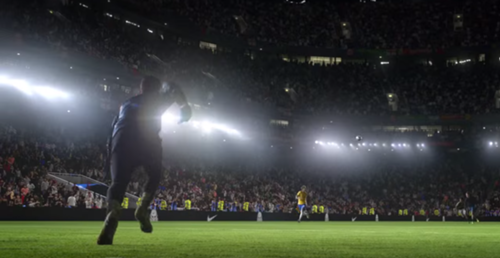 As of today we're a week out from the biggest organized sporting event in the world. Here, not so much, but it's growing each cycle thanks to coverage of NBC (Premier League, MLS), Fox (Champions League, FA Cup), ESPN (ESPN FC) and BeIN Sports (La Liga, etc).

For the US, there is little hope for anything aside from moral victories. Even coach Jurgen Klinsmann has said we're not a good enough team yet. But there is a very bright spot on the US roster in the shape of Julian Green, the A+ prospect who is looking to crack his way into the second best side in the world in Bayern Munich. He also happens to have been born in Florida and his father still lives in Tampa, but more on him in the coming days when I get to group and team breakdowns.

The hype is usually the junkiest part of any phenomenon but honestly, the excitement in the run up to the World Cup -- qualifying, the drama of final rosters, the dream of figuring out a way your country can navigate its way to winning -- is the best part of the whole thing usually. Once the matches start, there is so much pressure on the players and coaches to not make an early, embarrassing exit that the quality of the football suffers a lot.

Just like the Super Bowl, the best part of the World Cup is usually the commercials.

In the past, Nike has given us some real gems. I know, Nike is a horrendous corporate citizen, but just put that aside for a moment since we're here to talk about the football. Write the Future (directed by Alejandro Gonzalez Inarritu), Take it to the Next Level (the best thing ever directed by Guy Ritchie), and The Secret Tournament (directed by Terry Gilliam) are three of the best commercials ever made, but with the Cup taking place in Brazil this year, here are a few of the best Brazil spots:

The beats the shit out of Mike Trout hitting baseballs with his order into a Subway, no?

Nike has two spots for 2014: Risk Everything, directed by Brian Glazer:

... and Winner Stays, directed by Ringan Ledwidge, which is the flagship spot, featuring cameos by Kobe Bryant, Irina Shayk and MMA fighters Jon Jones and Anderson Silva -- and even the Hulk.

Like their Euro 2012 spot, My Time is Now, Winner Stays is a bit of a let down by the great standard they've set. It's a fun spot, but it's fronted by Cristiano Ronaldo, who is as irritating without a ball at his feet as he is dazzling with one. And the spot was made months ago, before we knew players like Zlatan  Ibrahimovich would not be going.

Nike ran into the same problem with Write the Future, which featured a Ronaldinho segment that had to be quickly replaced when he didn't make Brazil's final roster. He was replaced in the shorter ad with Robinho, who has now all but been erased by Neymar in commercials and on the Brazilian squad.

How much has Neymar taken over? He and his father are fronting a spot for Beats by Dre called The Game Before the Game, that's how much.

Adidas has had their share of gems over the years too, including my favorite spot ever, Road to Lisbon spot for Euro '04:

They also had the Jose + 10 spot, which used CGI to mesh current World Cup stars (at the time) with ones of the past, like Franz Beckenbauer and Michel Platini.

But for 2014, they went the serious, dramatic route, hiring Fernando Mirelles (City of God) for The Dream: All In or Nothing, which features a new Kanye track, God Level. It's fronted by Lionel Messi, who doesn't traditionally shine in the World Cup the way the other little Argentine, Maradonna, did.

If you need any more help getting into the spirit of the Cup, I'd suggest two things: buy a Panini sticker album and watch the ESPN 30 for 30 Soccer Stories on Netflix -- I'd particularly recommend Maradonna '86, The Myth of Garrincha and The Mysteries of the Rimet Trophy and The Two Escobars.

In the coming days, look out for a full breakdown of groups and which players we're looking most forward to watching out for. The World Cup begins June 12, 5pn, with Brazil vs Croatia.