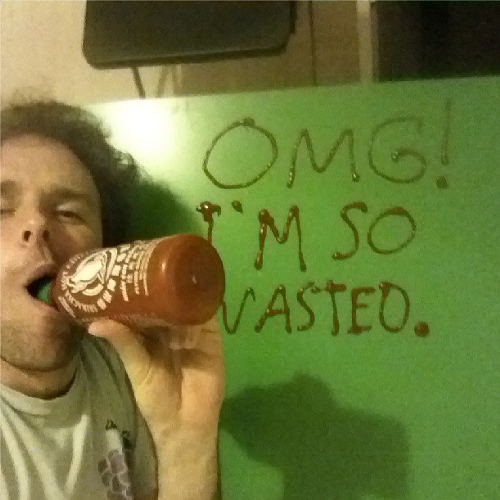 Emperor X being weird, somewhere other than Orlando (via @emperorx on Instragram)

Sure, Orlando has a ton of quirk - we have a theme park where you can feed hot dogs to live gators and pose upon their broad backs, it's basically summer 365 days a year but we have an unincorporated area called Christmas that celebrates the wintry holiday year-round, you can catch a re-enactment of Jesus's crucifixion daily, our most famous personal injury lawyer regularly damages his own reputation at our divey-est dive, etc. - so it's not shocking that the A.V. Club notes that Orlando-born musician Emperor X is from a "fairly strange place." Someone revoke my O-card, because Emperor X is actually from Jax, and I should've remembered that.

In a brief introduction to Emperor X's new track, "Fierce Resource Allocation," off his upcoming album The Orlando Sentinel (out June 27), the pop culture-obsessed website goes straight for the Disney vein to qualify their "strange" comment (even though Disney has parks in California, Paris, Tokyo and Hong Kong without the mousey company absorbing those cities' identities), but I'm sure we could all think of other reasons to call us strange, especially considering Emperor X's most recent show was at that specially peculiar place, the Space. Commemorative tickets were created to honor that Emperor X date, featuring photos of Orlando (you will have to tell me if yours had a Disneyscape, but I somehow doubt it did).

Check out or revisit Emperor X's 2012 album Central Hug/Friend Army/Fractaldunes to delve deeper into this dance-y electronic oddity we're proud to claim as one of our neighbors: