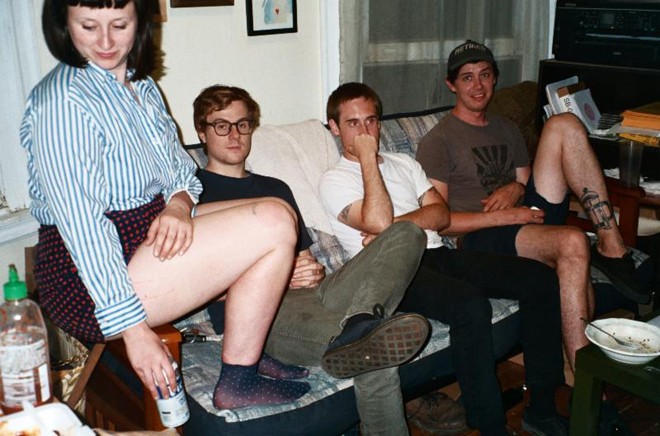 If ever you needed proof that the '90s indie revival was in full bloom, the latest Norsekorea bill was as good a case as it comes. Between local Superchunky rockers Jr. Meowzer and touring bands Swearin' and Potty Mouth, it’s like someone just pressed skip over the last two decades.

It was nice to see Jr. Meowzer playing their own material again. That Guided by Voices cover set they did at one of the NK cover shows early this year wasn't so great. But their own songs reminded me of why I fell for them in the first place. With poppy melodies cut from good emo and fed through a careening punk blender, it’s the sound of young, shredded hearts.

Massachusetts’ Potty Mouth, however, live the ‘90s gimmick to a studied degree. The beanie and swallowingly large T-shirt of frontwoman Abby Weems said it all without a word. This band is the slack, smeared, subversive cool of the ‘90s personified and revived in living color. And though they are straight atavism, they do it with taste, spark and authenticity. Seriously, these girls rock hard.

But Swearin’ did it the best by far. With a sense of song and sound that’s deeper and more dimensional, they’re just a more complete act. Bandleader Allison Crutchfield may think it's marginalizing to consider themselves in light of their obvious ‘90s forebears but, too bad, they're heavily referential. But they're also very good. And it’s their quality that distinguishes them – from their influences, from their peers, from everything.