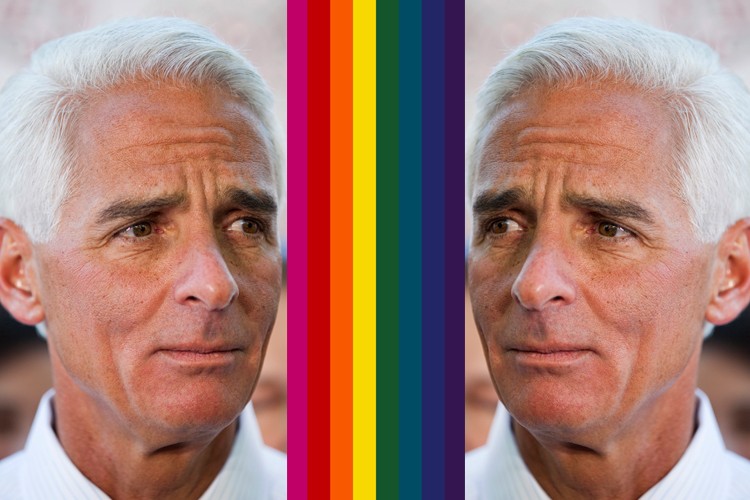 via salon.com A mere two days after the release of former Republican Party of Florida figurehead/prisoner Jim Greer's steamy tell-all IN WHICH HE CONJURES SKANKY MAN-ON-MAN LOVE AFFAIRS BETWEEN CRIST AND MEN, Equality Florida's political action committee came out this afternoon with an endorsement for the former-Republican-former-governor-sometimes-sunscreened minx. It's kind of big deal, and we saw it coming when EQFL told us to save the hour via press release yesterday, but who knows if it will boost the tuft-of-white's chances among the Floridian electorate. He sure didn't come when we called. One thing we can be sure of: Nan Rich is totally bleaching her hair and drinking whiskey right now. Oh wait, that's us. Presser below!

Equality Florida Action PAC, the largest organization dedicated to electing pro-equality candidates in Florida, today endorsed Charlie Crist for Governor. “The early endorsement reflects the urgency of electing a Governor who will speed progress when it comes to equality, not stand in the way of fairness,” said Stratton Pollitzer, chair of the PAC. “Florida is at a critical moment in our struggle to end discrimination, and the next Governor will have a tremendous impact on the everyday lives of lesbian, gay, bisexual and transgender (LGBT) people in our state,” added Pollitzer.  “Charlie Crist has taken a clear stand for equality and fairness and is delivering a message that will inspire the growing pro-equality majority in our state to stand on the right side of history.” A former Republican Governor turned Democratic contender, Crist broke from his party over its increasing hostility toward gay people, women, the poor and the party’s voter suppression tactics.  He has apologized for votes that aligned him with his former party’s platform, which went against his own conscience, and has made good on promises to be an unyielding voice for full equality under the law for the LGBT community. Even while serving as a Republican, Crist was widely despised by far right extremists who viewed him as too moderate, and he was known to break with his party on a variety of issues. In 2000, as Commissioner of Education, Charlie Crist was the first statewide elected official to support an anti-bullying bill that specifically included protections for LGBT students, and he refused to back down in the face of criticism from within the party leadership. As Governor, Crist ended his support of Florida’s notorious anti-gay adoption ban and pledged to help dismantle it. When a Miami judge ruled the ban violated basic rights and harmed children by denying them the security of a forever family, Crist refused to appeal the decision and worked with the Department of Children and Families to stop enforcement of the ban that same day, paving the way for adoptions to take place immediately. As a candidate for US Senate in 2010, Crist supported a variety of LGBT issues at the federal level, including the Employment Non-Discrimination Act, the Uniting American Families Act and the repeal of Don’t Ask, Don’t Tell. Not only is Charlie Crist a strong supporter of LGBT equality, but he is already running a race strong enough to combat Rick Scott’s massive war chest. He is consistently shown as even or ahead of Scott in polling and is attracting donors who are raising the kind of money that is needed to win. As governor, Crist was a strong supporter of civil unions, and in recent years he has come out in support of marriage equality. “Charlie Crist’s position on marriage equality reflects the evolution of Florida voters,” said Pollitzer. “The clear majority now supports full legal recognition of marriage equality, and that support is growing rapidly regardless of political party, age or religious identification.” With marriage equality looming on Florida’s horizon, “We must have a pro-equality Governor in the Tallahassee” added Pollitzer. “The next Governor is likely to appoint four Supreme Court Justices, and we cannot afford to leave our Supreme Court in the hands of a Governor who refuses to recognize even the most basic rights for LGBT people.  We encourage every Floridian who values basic human rights to support Charlie Crist for Governor.” In addition to the Equality Florida Action PAC, Charlie Crist has been endorsed by the Human Rights Campaign, Florida Professional Firefighters, Florida Education Association, Florida Plumbers & Pipefitters and the Florida Young Democrats, along with more than 100 current and former state and local elected officials. “Floridians deserve a governor who fights for them – including for their right to marry the person they love and to be safe from discrimination in the workplace,” said Charlie Crist.  “I am proud to stand with Equality Florida Action PAC, the Human Rights Campaign and Florida’s LGBT community to fight to make Florida fair for all hard-working families.” Each election cycle, Equality Florida Action PAC’s endorsements serve as a valuable source of information for hundreds of thousands of voters statewide.

OH, AND NOW THE HRC HAS JUMPED ON BOARD. SMOOTH GAY SAILING FOR CHARLIE!

HRC Announces Endorsement of Charlie Crist for Governor of Florida

WASHINGTON – Today the Human Rights Campaign (HRC), the nation’s largest lesbian, gay, bisexual, and transgender (LGBT) civil rights organization, announced its endorsement of Charlie Crist for governor of Florida. “We are honored to stand with Charlie Crist in his campaign to be the next governor of Florida,” said HRC National Field Director Marty Rouse.  “Governor Crist will work to improve the lives of all Florida families – including LGBT families – and for that he has our gratitude and our support.”