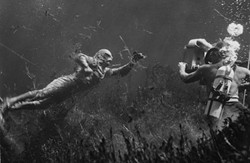 Eat your heart out, Michael Phelps: the Creature zooms through his Black Lagoon in search of babes.

Location Matters is a series that reflects upon pieces of Central Florida immortalized in popular film/television.

There has long been debate concerning where the Creature from the Black Lagoon, a.k.a. Gill-man, falls amongst the lineup of classic Universal Studios Monsters. Many consider him second tier, only because he arrived so late in the game. Granted, by 1954, the year of Creature From The Black Lagoon's release, Universal had already covered the Phantom of the Opera, Dracula, Dracula's daughter, Frankenstein, Bride of Frankenstein, Son of Frankenstein, the Mummy, the Mummy's Ghost, Wolf Man, She-Wolf of London, the Invisible Man, the Invisible Woman, the Mad Ghoul, and even the Thing That Came From Outer Space. That's an infantry right there.

That said, no one considers Dracula's daughter or the Mad Ghoul to be on the Universal Monster A list. Also, Frankenstein and the Mummy cancel each other out, because they were played the same guy (Boris Karloff). The Invisible Man? He's not even a monster, he's just some regular jackass who made himself transparent! You can distill the Universal Monsters down to Phantom of the Opera, Dracula, Frankenstein, Wolf Man, and the Creature. That should be their starting lineup, if this rag tag team were somehow in the NBA finals. The Creature is sort of the only legit full-on monster anyway. He's definitely the least human. He doesn't wear clothes, he doesn't change back into a guy at any point, and he sure as hell can't play the organ.

We get a little defensive about our Gill-man here in Florida, because significant chunks of all three of his films were shot in and around our swampy confines. If you find yourself in Orlando with a day to kill and you're willing to drive one or two or maybe three and a half hours (less tiring than standing in line at EPCOT for Soarin', we promise), you can soak up some of the Creature's most notable lagoon-based haunts.

Most of the original Creature From The Black Lagoon was shot in California on the Universal backlot, but the fantastic underwater sequences that find Gill-man in a strange and delicate ballet with object of desire Julia Adams were filmed at North Florida's Wakulla Springs. About twenty minutes south of Tallahassee, Wakulla was considered a sweet place to be even in the Upper Paleolithic era (loads of prehistoric fossils have been uncovered there). Tinsel Town discovered Wakulla in the 1930s, using the lush area for some of the Weissmuller Tarzan films. Creature remains the most famous production to film at Wakulla, though, the glassy waters providing the perfect environment for scenes that are still routinely hailed as the best submerged filmmaking ever put to celluloid.

Of course, if you've seen Creature From The Black Lagoon you might not be able to splash about Wakulla's designated swimming area in a very cavalier manner --- the springs' far side where you aren't supposed to go still looks a bit too dense and foreboding, like it might contain something not of our land-lubbing world. If that's the case, just retreat to the nearby Wakulla Springs Lodge where they have a handful  of cozy rooms for rent, a spacious lounge, and a framed Creature FTBL poster autographed by Julia Adams, stunt swimmer Ginger Stanley, and Gill-man himself Ricou Browning (that's the underwater Gill-man himself; on land Ben Chapman was in the rubber suit, he of Jungle Moon Men fame). 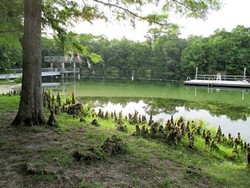 The original Black Lagoon, now a swimmin' hole, at Wakulla Springs. Surely the teenage lifeguards can defend you from Gill-men.

1955's Revenge Of The Creature moved the action closer to home, dropping Gill-man in the gorgeous waters of Ocala's Silver Springs, the muggy thickets of Palatka's Rice Creek, and even beloved Flagler County attraction Marineland (the aquatic life park agrees to house Gill Man in the film after he's captured, despite the fact they have no idea what he is or if he gets along with dolphins). Late in Revenge ol' Gilly goes on an urban rampage and menaces diners at Jacksonville seafood eatery the Lobster House; unfortunately, the Lobster House burned down in the 1960s, so you can no longer nosh hush puppies where the Creature went shit house. Marineland is still standing and operating their dolphin shows, though, and if you're out that way you can also visit the town of Glenn Cove Springs where they shot some of Revenge's land stuff. Alas, there is no plaque in the center of Glenn Cove commemorating Gill, damsel Lori Nelson, or Clint Eastwood's debut role as a gangly lab assistant. There's no marker in Silver Springs or Rice Creek either, but as with Wakulla these parks are undeniably Creature-ish.

In terms of quality, Revenge Of The Creature can't hold a candle to its predecessor (the mystery and intrigue is absent, especially in the cinematography), and 1956's The Creature Walks Among Us continues the tradition of diminished returns. Jack Arnold, director of the first two Creatures, didn't return for the awkward final installment that begins again in Gill Man's native areas. Some bits were shot on the Caloosahatchee River down in Fort Myers, and the production returned to Wakulla Springs for more underwater shots, but the movie takes a strange twist when the Creature is set ablaze during his capture this round by terrified humans. Scientists rehabilitate Gil-man, giving him quasi-lungs, and suggest he give life on dry land a shot. Gilly agrees to try the whole "breathing air, wearing clothes, living in a house" thing. The Creature doesn't hate his new life, but he doesn't love it, and it all goes to pot anyway after some dingus frames the unassuming monster for murder. Refusing to be anyone's patsy, Creatch kills his tormentor and returns to the ocean where he doesn't have to worry about living on a fixed income.

By the way, Ricou Browning reprised his role as the underwater Creature in both sequels (the Fort Pierce native could hold his breath for up to five minutes down there) but Tom Hennesy and Don Megowan were the land Creatures in Revenge Of and Walks, respectively.

Gill-man has popped up here and there since his original trilogy of terror. He had a humorous cameo on The Munsters as rich Uncle Gilbert from "the Old Country," a retired politician who gained independent wealth despite living in a lagoon. In 2009 Universal Studios Hollywood made Gillzo the star of his own musical at their theme park (the show ran for just under a year before, in an eerie callback to Creature Walks, a fire shut down production). Several name directors have attempted over the years to reboot the Creature, including John Landis, John Carpenter, and Ivan Reitman, all to no avail. Peter Jackson was offered the chance to work on a new version of the tale circa 2005 but chose to put Jack Black in a King Kong remake instead. As recently as 2012 Universal put the gears into motion for a Black Lagoon 2.0; the production is currently on hold.

Behold the beauty of Silver Springs, playground for the second Creature feature. Photo by Ashley Belanger.

Meanwhile, the spirit of the original Creature still hangs over our state, lending a wonderfully macabre touch to otherwise serene swamplands. It doesn't even matter that Gill-man doesn't have a bride or a daughter or a son or a pet ghoul who is also a doctor from outer space. He's our Gill-man, and we love him.