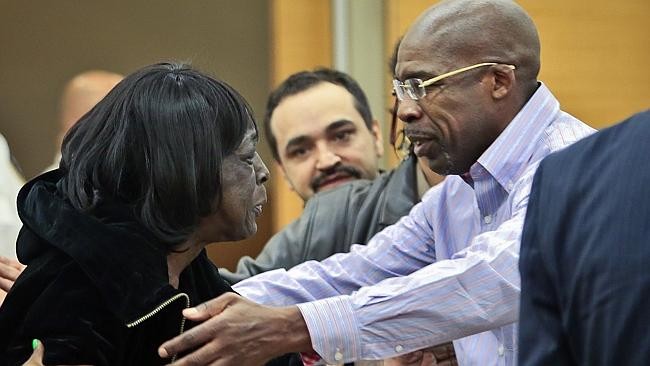 Fleming hugs his mother after being declared free following almost 25 years in prison.
via

Jonathan Fleming has spent the bulk of his last 25 years behind bars for a crime he didn't commit. In 1989, he was convicted of murdering a 22-year old man in Brooklyn, while he was on vacation with his family ... at Disney World. Throughout the trial, Fleming maintained his innocence. His attorneys presented video and photos of Fleming in Florida with his family at the time of the killing, but to no avail.

The damning piece of evidence that got him convicted was a witness who said that she saw Fleming committing the crime. She later recanted the testimony, as she was arrested prior to the trial and testified as a means to avoid criminal charges of her own.

One of the most important pieces of evidence that was overlooked during the original investigation was a bill for phone calls Fleming made the night before the murder from his hotel room in Florida, which was in the pocket of the pants he was wearing when taken into custody. The authorities claimed to have never found the receipt. When the investigation was reopened, the receipt was found in police records, further proving Fleming's innocence.

The phone bill, along with a police report from Orlando where hotel employees stated that they saw Fleming and his family at the Orlando hotel at the time of the murder, backed up his alibi and allowed him his freedom in April of this year.

When asked what he would do now that he was free, Fleming said, “I'm going to go eat dinner with my mother and my family, and I'm going to live the rest of my life.”

Today, Fleming and his lawyers filed a suit seeking $162 millions from New York City to recompense the wrongly convicted man for the almost 25 years he spent in prison, and to help him get the reboot he so desperately needs. Sympathizers set up a crowd-funding campaign to assist Jonathan Fleming until the lawsuit is settled.