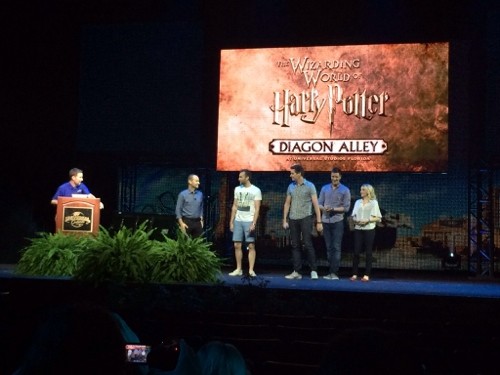 After months of rumor and speculation, we finally have an official Diagon Alley opening date. The new Wizarding World of Harry Potter attractions at Universal Orlando will formally open to the public on July 8, 2014.

The date is later in the summer than many fans speculated, and those who had booked travel for later this month may be scrambling to change their reservations. Keep in mind that purchasers of special Universal Vacations packages are guaranteed admission to Diagon Alley during the morning starting June 29, and the area should also "soft open" to day guests at some time before the official opening.

I got a peek inside Diagon Alley this morning while interviewing hosts of the Today Show, and the scenic design is just as stunning as the concept art suggests. I'll have more details on the area and its signature Gringotts bank coaster after the red carpet media events tonight and tomorrow morning. Keep following @skubersky on Twitter for the latest updates on Diagon Alley.