A Comic Shop is expanding the Geek Easy 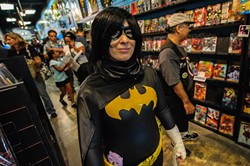 A Comic Shop has been a home away from home for comic book lovers since they opened their doors in 2006. They've made some interesting choices along the way, such as not selling back issues of comics, choosing to focus their shelf space on new releases instead. They also treat the hallowed comic holiday of "Free Comic Book Day" a little differently than most shops, making theirs a month-long celebration of free stuff, culminating (if you hit the shop all four Saturdays) in a free graphic novel.

In 2013, owner Aaron Halaand cemented the shop's spot in the hearts of Orlando geeks by opening the The Geek Easy. Attached to A Comic Shop, The Geek Easy is the perfect place to sit back and read your just-purchased comics while drinking a beer (they almost always have a decent selection) or enjoying one of their pretty damn awesome (and inexpensive!) grilled cheeses. In the evenings, it becomes more social than anti-social with open mics, Q&As with artists and experts, as well as a ridiculously well attended nerd trivia night.

Well, it looks like the Geek Easy is, like a goldfish in a tiny bowl, outgrowing its environment. Haaland took to the Internet to finance the shop's expansion, because, as he says, "A Comic Shop & The Geek Easy are yours. They are for the community of geeks, nerds, fans, and friends, and we want to make it feel even more like your own place as we continue to grow. Indiegogo is a great way for us to include the community and give back as you help us in this process." The perks for donators are pretty sweet, too, ranging from the donor's name scrawled on a wall somewhere inside the new space to a lifetime of free beer. Yes, a lifetime.

If you're interested in helping the Geek Easy expand its awesomness, you've got until July 6 to donate. As of this posting, they're about 34 percent of the way to their $30,000 goal. With that money, Haaland plans to add a restroom (hopefully with more original works from visiting artists), add more seating and equipment to expand their food and drink offerings.

Below are the proposed renovations: