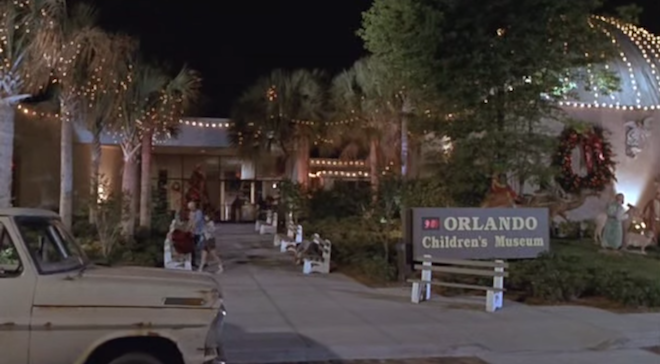 Every generation, it seems, has a dim-witted but lovable redneck to call its own. In the 1960s they had Gomer Pyle, U.S.M.C. In the '70s there was Billy Carter, brother of President Jimmy (so cherished they named a beer after him). The '90s seemed like a hayseed free-for-all, what with Billy Ray Cyrus, Hank Hill, Tom Arnold and the Rednex (authors of "Cotton Eye Joe"). In the 1980s, though, one Southern-fried wiseacre stood several heads above his competition. Hailing from the Blue Grass State of Kentucky, Jim Varney stole our hearts as excitable and perpetually denim-clad Ernest P. Worrell, whose catchphrase "Knowhutimean?" still rumbles through the hearts of the pure and innocent.

Ernest was already well established via a slew of commercials and a Saturday morning TV show when he rolled into Orlando to shoot his second feature film, 1988's Ernest Saves Christmas. This outing and its predecessor, the prior year's Ernest Goes to Camp, are usually pointed to as the cream of Ernest's crop (Varney would churn out a staggering nine movies as this character, stretching pretty late into the 1990s; incredible when you realize Pee Wee Herman's film canon stops at two). Indeed, the Ernest Christmas movie, though predictable and far from groundbreaking, is a jolly affair with a dash of heart that never lags or feels cloying. Varney's rhythms propel the movie and the guy is particularly amusing when he goes "undercover" as various oddball characters.

Of course, the most important aspect of Ernest Saves Christmas (in relation to this article, anyway) is that it does nothing to mask the fact they shot in Orlando. In fact, they announce it up front: when Santa Claus arrives at Orlando International Airport, a title card appears noting the time and exact location. The unmistakable glowing signage of OIA hangs in the background as Santa strolls to baggage claim, winking at children and attempting to discuss business with a fellow traveler. Our city's old Science Center (since moved/repurposed) doubles as the Orlando Children's Museum, where Santa tracks down the fella he hopes will agree to take his job (yes, like so many other elderly folk, Santa Claus has come to Florida to retire). Later on, a few key scenes take place at the Orlando Amtrak Station, which isn't as bustling as you'd expect a train station to be on Christmas Eve in a movie. On the other hand, this is an Ernest movie. Reality doesn't always factor in. See: the bit where Ernest flies Santa's sleigh into space.

Sadly, the home of Vern, Ernest's long-suffering neighbor whose physical identity remains shrouded in mystery, was constructed on the backlot at Disney's MGM Studios. It is not an actual Orlando residence you may visit to reflect upon the nature of Ernest and Vern's bizarre relationship. And yet we should still celebrate, for this suggests that the City Beautiful always was Ernest's home sweet home (at one point Ernest even mentions that he "grew up" with Vern, ostensibly in that very neighborhood). At very least we're the metropolis where Ernest saved Christmas. That's a more commendable feat than going to camp or going to jail or being scared stupid or riding again or executing a slam dunk. Not to diminish the varied accomplishments of our pal Ernest here. Saving Christmas, though, probably had a more positive global effect than learning how to slam dunk.

Hey Vern, it's the Orlando Amtrak Station at "magic hour!" Looks pretty much the same today.

A few stray points concerning Ernest Saves Christmas that are either of vital or no importance:

- Ernest has a "Keep 'Christ' in Christmas" bumper sticker in the glove box of his taxi; this has fueled much speculation over the years regarding the character's religious views (considering the fact he impersonates a government official and lies to a cop in this movie, he can't be that religious)

- Patty Maloney, who is a real firecracker as one of Santa's elvin helpers, played Chewbacca's son Lumpy in CBS's infamous 1978 turd The Star Wars Holiday Special

- at one point Ernest and Santa visit the set of a horror movie; lo and behold, the horror movie monster appears to be the Creature from the Black Lagoon, covered in just enough fake swamp muck to avoid copyright issues

- at one point Santa reminds someone that "many of [the world's children] hold cultural beliefs that don't include Santa Claus!"; this is not something movies like this typically acknowledge, so hats off there

- you can tell they actually filmed this in Orlando because at various points, Jim Varney's face is soaked in sweat 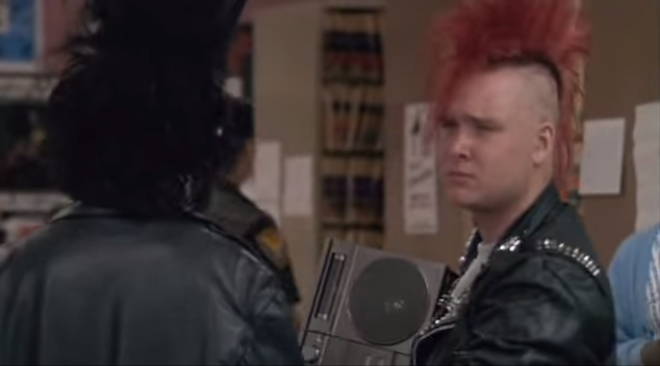 Punk's not dead, it's just trapped in an Ernest movie. No, this is not the same punk from Star Trek IV.

Ernest Saves Christmas was the highest grossing Ernest movie, raking in upwards of $28 million upon its release. Logic dictates the folks behind Ernest probably considered spinning him into another rip-roarin' Yuletide adventure after outings like Ernest Goes to School and Ernest Goes to Africa failed to perform. The chance never came before Jim Varney was robbed from us via lung cancer at the age of 50, but let's be happy for what we have. 'Tis better to have Varney'd and lost than to have never Varney'd at all. Besides, Ernest Saves Christmas is Gandhi compared to 1972's utterly atrocious Santa & the Ice Cream Bunny, which is the only Christmas movie those cocoanuts down in Fort Lauderdale can claim.