June 20, 2014 at 3:33 PM
comment
When I heard Jimmy Fallon was coming to Orlando to film The Tonight Show — and for Harry Potter-related-reasons, at that — I think I stopped breathing for at least 45 seconds before I got my act together and realized I needed to quickly figure out whom or what I had to strangle to get tickets. Not surprisingly, the answer was related to patience and Internet prowess instead of murder. But even after lots of banging on my keyboard and swearing at my computer, I didn’t end up getting tickets — they sold out in minutes. In case you’re wondering, online queues are BS. If it says don’t refresh, REFRESH, DAMN IT. Online-queue operators are liars. Anyway, as luck would have it, a friend of mine who’d seen me post about the show magically got four tickets hours later (??????) and offered to take Josh and me after I went on a Facebook tirade about the whole process. Whether it was out of guilt or the goodness of her heart, I do not know; she promises the latter, but I’m really good at guilt trips, so I will probably never really know. So we went, we saw, I fangirled, Josh was polite enough to hide his embarrassment, etc. It was such a blast, and worth taking PTO for, even though I only have three and a half hours left until mid-October. Hope I don’t get sick or kidnapped between now and then. 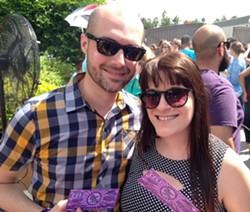 If you didn’t get to go (which I’m truly sorry about), here are six big things you missed out on aside from having your dreams come true (specifically, during the June 18 taping): 1. An elephant peeing onstage. I’m a big believer in starting things off strong (see also: the pilot episode of Lost), and this list is no different. In case you missed the June 18 show, here’s a primer: Jeff Musial brought in an elephant, which smashed a watermelon onstage and gave Jimmy a ride. But what at-home viewers missed was the waterfall of urine that came out of said elephant during a break in filming. A stagehand guy brought out a pathetic office-desk-level trash can near the end of the gush fest, which Musial referred to as a Dixie cup. It was everything I never knew I needed to know, but also extremely disgusting. Granted, it could’ve been worse. 2. Experiencing everything that goes into a show taping. This isn’t something that I got specifically from seeing this taping, personally, since I’ve seen a few shows filmed before (including this one in 2005, when Jay Leno was hosting), but for Josh and the two friends I was with, it was very cool. From becoming familiar with all the people involved in running the show’s events, to seeing how the actors communicate between takes, to having your mind blown by how the set looks in real life versus on television, seeing a show taping is an experience — and one you can’t get too often in Florida. Sadly, they didn’t allow photos inside the studio, so you really had to be there to get the behind-the-scenes experience — complete with the audience-prep guy (official term) dancing in his underwear.

My hair is thrilled with the humidity. #hurryupwinter 3. Free park admission after the taping. The band during our taping happened to be Fun., which we were stoked about since we really like them. However, they were playing outside near the Hollywood Rip Ride Rockit and didn’t go on until 9 p.m., which was three hours after the rest of the taping finished. DUMB, right? EXCEPT NOT. We were pleasantly surprised that we exited the studio where the show was filmed right into Universal Studios itself, which meant we had free run of the park until it closed at 9 p.m. We grabbed drinks and rode the Transformers ride, which neither Josh nor I had experienced yet. It was basically the Spider-Man ride at Islands of Adventure but more headache-inducing, which may have less to do with the ride and more to do with me getting old. Anyway, the park entry was a nice little bonus — especially since we also ran into an E! event that was happening by the new Diagon Alley attraction. We were on our way to grab dinner, but obviously seeing Harry Potter actors took precedent in my wizard-loving heart. Which is saying a lot, since y’all know how I feel about food.

Just five feet from Draco Malfoy, NO BIG DEAL. SO many of the cast members were there – Tom Felton (who plays Draco Malfoy, pictured above), Evanna Lynch (Luna Lovegood), Bonnie Wright (Ginny Weasley), James and Oliver Phelps (the Weasley twins), Warwick Davis (Professor Flitwick), Matthew Lewis (Neville Longbottom) and more that we didn’t get a chance to see. Bad. Ass. 4. VIP concert access. Speaking of Fun., our snazzy Jimmy Fallon wristbands got us premier access into the performance, in front of the plebeians and other park guests.

We were only about five rows back. This was a nice change from being in the VERY BACK CORNER, where we were during the actual show taping.

FUN PERIOD! I developed a crush on the lead singer, Nate Ruess, that night. Mostly because he reminds me of Mark Wahlberg minus the douche factor and Boston accent, but plus talent. JOKING. Boston accents don’t bother me that much. 5. Seeing the Roots perform live. I honestly don't know a whole lot about the Roots other than they're really talented and apparently have no problem rapping about Harry Potter. But seeing them live was a whole different experience than seeing them on TV. There's something about watching a great band perform live that you can't really get by watching from a TV screen. I'm not sure if it had to do with the atmosphere of the crowd, the jamming between takes, the feeling that they obviously consider themselves a family first and a band second, or a combination of the above and more. I'm going with the latter. If you ever get a chance to see them live, please do. 6. Sharing with hundreds of others the sad realization that the Orlando Magic mascot has become more interesting than the Orlando Magic. Being an Orlando Magic fan has been rough the past few years. The traffic hater in me appreciates their not-so-stellar recent record considering I live across the street from the Amway Center, but the rest of me is a little downtrodden. I remember that night in 2009 when I learned they were going to the finals. That same night, Hedo Turkoglu rode past me in a pedicab on the way home from a bar, and I cried tears of happiness when he waved to me. The bar part may have made me a little more emotional than usual, but I digress. Vodka involvement aside, that level of emotion has not been evoked from me in quite some time where the Magic is concerned, but Wednesday night my Magic fire was reignited because of Stuff, the Magic mascot. See for yourself what I mean here.

Image credit: sosyalmedyada.net Stuff obviously won, even though Jimmy says it was a tie (he is biased). By the way, does Hashtag the panda wear jeans? I'm confused as to why a dragon looks more realistic than someone dressed as a real animal — especially one with a Tonight Show costume budget. Did you get tickets to see “The Tonight Show” taping this week? Have you ever been to a live show taping?