An early look at the downtown Orlando Magic entertainment complex 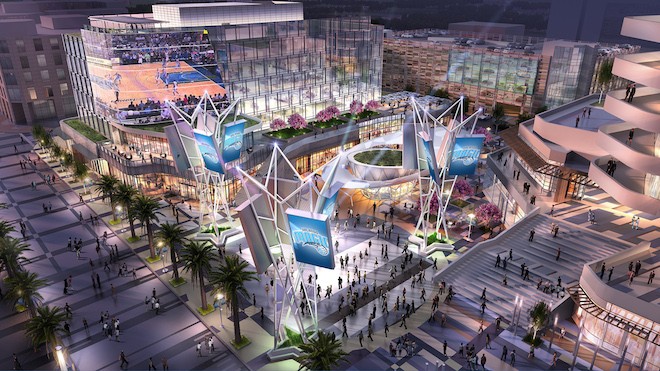 Yesterday, the Orlando City Council approved a zoning change that brings the Orlando Magic entertainment complex one step closer to reality. Called the Orlando Sports and Entertainment District, the $200 million complex will house offices, residential units, hotel spaces and retail spots. The plan is to move 100+ Magic employees from their current home at the RDV Sportsplex in Maitland to the new location downtown. There has been no word on which hotel or shops will be taking up residence, yet.

Located across the street from the Amway Center, the space will also be home to an open air plaza capable of holding up to 10,000 people, which could be a fantastic new option for outdoor festivals and concerts.

“It’s incredibly exciting to get to the approval stage. Now, the real work begins in planning for construction. It’s going to be a long project, and from start to finish we’re probably looking at five-to-six years. But we’re very excited to get started," said Magic CEO Alex Martins, in a prepared statement.

We've got our fingers crossed that the Orlando Sports and Entertainment District will pave the way for Church Street street performers once again.

On the negative side of the upcoming construction on the new complex is the need to tear down the frequently used city-owned parking garage that sits on the land slotted for development.

“We haven’t worked on our construction schedule yet. We are having a lot of discussion about how it impacts the operation of the Amway Center this year, not just for Magic games, but from October to April, that’s the busiest time of the year for the Amway Center,” Magic CEO Alex Martins said. “That parking is utilized, so we are studying it and looking at a number of different options. We may take down part of the garage or we might wait until the end of the season. We’ll determine over the next couple of months what the schedule truly looks like.”

Below are the rest of the renderings courtesy of the Orlando Magic: