Wall Street Plaza is one of the best places in the U.S. to watch the World Cup 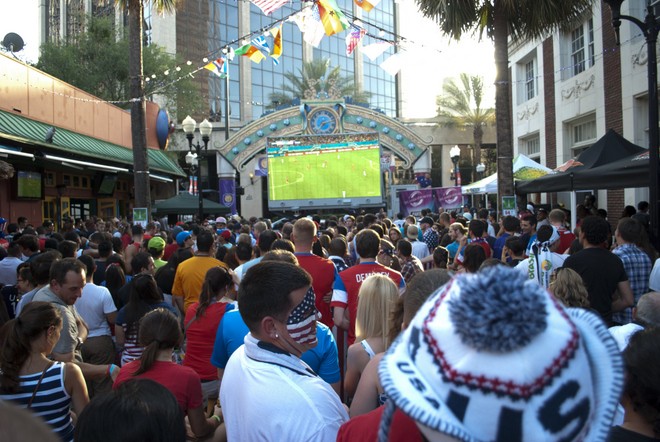 25 Fan Favorites from the USA vs Ghana Wall St Party

The Boston Globe recently released a list of the five best places in the U.S. to watch the World Cup and sitting smack in the middle of that list is Orlando's own Wall Street Plaza. We've been to the last two USA games at Wall Street, and, it's a crazy time: painted faces, costumes, competitive drinking and lots and lots of patriotic cheering. They've made themselves the headquarters of the World Cup in Orlando, packing people in to watch the games on 16 foot television and changing their name to "Soccer Central" for the USA games. The parties are hosted by Orlando City Soccer, who will become an MLS franchise in 2015.

Wall Street Plaza is joined on the list by Grant Park in Chicago, Mc Teague's Saloon in San Francisco, Arlington Cinema and Drafthouse in Virginia and the Power and Light Disctric in Kansas City.

This is the scene from the Plaza on Sunday when USA scored its second goal against Portugal, tying up the game: