GOOD AFTERNOON! Here at Orlando Weekly HQ, we've fired up our nervous anticipation generator and have curled our bodies around our Twitter and Facebook machines as we await Miami-Dade Circuit Judge Sarah Zabel's first utterances on the constitutionality of Florida's gay marriage ban after 4 p.m. While we wait, here are some ways you can, cough, bone up on the issue. We first reported about the six couples challenging Miami-Dade County for not issuing them marriage licenses back in January. Since then, there has been a string of judgments from state and federal judges across the country in favor of gay marriage, all of which cite the the U.S. Supreme Court ruling in 2013 that banning marriage for LGBT citizens is at the very least a huge constitutional problem. It's also, of course, a matter of compassion. In the past few weeks, there has been a bit of a pile-on with regard to the pending case. Gubernatorial hopeful Charlie Crist has weighed in on the matter (he's a big gay lover); The cities of Miami Beach and Orlando have done the same; Attorney General and living pie-face Pam Bondi is very much against it; Orange County Mayor Teresa Jacobs is an idiot about it. Though most observers don't expect Judge Zaabel to make a ruling outright today, this is nonetheless an historic moment: Gay marriage is getting its day in court. It's also, as attorney Mary Meeks – who is one of the attorneys fighting the case and (full disclosure) represented this writer when he fought the perils of inequality two years ago – says in a new Watermark essay, a day of reckoning for the jerks on the wrong side of history.

The court room is already packed (it is reportedly the same court room that was used for the Al Capone trial in the early '30s, according to a Facebook post by Equality Florida CEO Nadine Smith. (Alleged) assface John Stemberger and his (alleged) bigot sidekick Mat Staver are in attendance, and Bondi's henchfolk have recently entered the room. But mostly it's packed with equality supporters and media, so there.

Do some reading, and we'll update you as soon as we hear something substantial!

3:55 p.m.: Here's a photo of the pro-equality legal team as posted by Nadine Smith on Facebook!

4:07 p.m.: No peeps yet. Here's a photo of the legal team with the plaintiffs posted by EQFL. NICE PEOPLE! 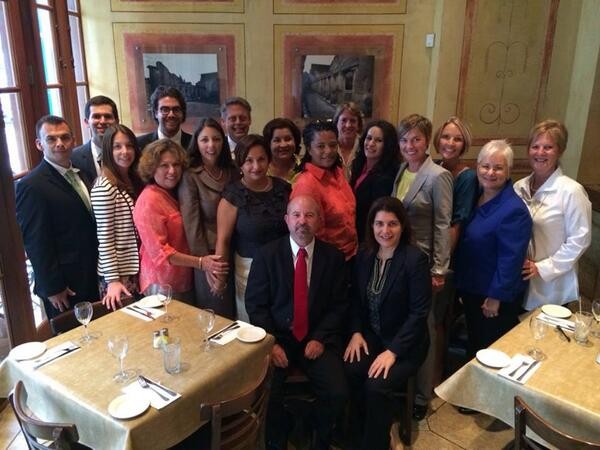 Carlton Fields argues #marriageequality ban is deprivation on #LGBT people. @equalityfl — Michael E Rajner (@MichaelRajner) July 2, 2014       4:15 p.m.: Walbot is apparently referencing the cruelty of DOMA and and the absence of a rational basis for a marriage ban.

@CarltonFields benefits for #LGBT should be protected, not discriminated. #sayfie @equalityfl

4:28 p.m.: We're currently hearing from Bondi's legal team, and Zabel is giving this guy a hard time for not acknowledging the Loving case. You know, interracial marriage. This guy is trying to make the point that the mob rule of the public against gay marriage should be held as "binding precedent" (Baker v. Nelson) because that has never been overturned. NEVER MIND THAT EVERY OTHER JUDGE HAS DECIDED OTHERWISE.

4:30 p.m.: Ruvin's attorney doesn't really have an opinion because he has no authority as to which laws the clerk should follow and which he shouldn't. No news is good news. "Neutral," "minesterial." BUT WAIT, THERE'S MORE. The clerk "wouldn't want to be presumptuous," should the judge bring this to a close in favor of the plaintiffs, so two things need to be addressed: basically official records and the fact that currently the clerk could be charged with a misdemeanor if he issues a license. THE FORMS ARE ALL BAD AND NEED TO BE CHANGED. 4:34 p.m.: To be clear, we need to get rid of "bride" and "groom" in case of gay marriages. SEMANTICS! In NY and SF, there are "spouse and spouse" lines.

4:35 p.m.: More "we don't mean to be presumptuous" from co-counsel. The laws need to be fixed WHOLESALE for the licenses to be issued. There are statutes apparently not being addressed, as has happened in other states (Ark.), and it caused a lot of confusion. This woman wants to make sure that courthouse staffers won't be arrested for obeying an order of the court. The order needs to be "comprehensive." Not sure how to read this, except that hopefully the judge will make arrangements to handle this.

4:38 p.m.: Plaintiff attorney from Carlton Fields is pointing out the significance of today's LBJ Civil Rights history and this weekend's July 4 Independence Day, becuz "that is all that we want to see today" – meaning we should all be free. OH AND ALSO, he's bringing up White-Out, as in "we used to have something called White Out." Judge just asked about Baker; Attorney says that since Windsor, 21 judges have found that Baker is no longer the law of this country "because of the doctrinal changes that have occurred in our country" since Windsor. "Baker just doesn't count anymore," he says.

4:41 p.m.: INTIMATE AND SEXUAL WERE JUST SAID! DRINK! Oh, and Lawrence v. Texas: The state cannot demean the sexuality of gay people. "No legitimate state interest in intervening in the personal lives of those individuals."

4:46 p.m.: AGAIN, every state has held that the right to be married is a constitutional right since Windsor. "Florida deserves to join those other states. We should not make our citizens legally second class citizens." AMEN.

4:47 p.m.: YAY FOR TURNING A PRO-MARRIAGE ARGUMENT INTO A PRO-GAY ARGUMENT! TOTALLY CRIBBING THE OPPOSING VIEW: "FAMILIES ARE INHERENTLY GOOD!" Well played, sir. LEST YOU THINK THAT'S WORKING, THE ASSHAT HAS TWEETED ABOUT HIS FANTASIES OF POLYGAMY!

Plaintiffs argue that "two parents are better than one". What ab 3 or 4 parents? Kids have right to best possible chance for a mom & dad.

4:55 p.m.: Attorney representing the Miami Beach/Orlando amicae briefs is saying that the state of Florida has not argued any legitimate state interest in keeping gays down. Cities, however, have argued that they are hurt by the ban because of its making gays and lesbians "lesser than" and it's bad for the economy. The judge is bringing up the economic impact, and saying he should get to the point. ALSO, "DEPENDING ON WHAT I DECIDE TODAY!!!" She said, "TODAY!"

4:58 p.m.: The tragic story of Janice Langbehn. YOU SHOULD READ HER STORY.

5 p.m.: Discussion about the "legitimacy of our government," meaning local govts are having to be enforcers of discrimination. BOOM!

5:02 p.m.: MAT STAVER IS PRESENTING HIS ORAL (!) ARGUMENTS NOW. He's going to try to address Windsor and Baker, but before he even goes there, he wants to make it clear that summary judgement CAN'T happen today. He's echoing the idiot Florida Family Action amicus brief in which they wipe all of this off as "hearsay." Watch Mat Staver look like a jerk. Drink!

5:05 p.m.: State doesn't have to show "RATIONAL BASIS," he says, basically saying that the state should be so irrational as to believe anything here. "Interesting that the state isn't making that argument," says the judge. Staver stammers.

5:06 p.m.: "What about Justice Kennedy's decision in Windsor?" asks the judge. Staver tries to deflect, saying Windsor was a federalism issue, so has nothing to do with states. OH, OK.

5:10 p.m.: Judge: What about all of the other states and their rulings? Staver: What about how awesome we did at freaking people out with marriage bans nationwide? Staver says ALL OF THOSE COURTS HAVE MISREAD WINDSOR. THAT'S HIS STORY AND HE'S STICKING TO IT. HE'S DOING THE STATE'S RIGHTS THING AND IGNORING THE JUDGES IN 21 JURISDICTIONS. BECAUSE HE'S A GENIUS.

5:13 p.m.: More procedural shit. Staver doesn't want to think that precedents have changed anything, so no interracial marriage, basically. The Baker case is the idiot right's only hope.

5:16 p.m.: Zabel isn't buying it. Seriously, she can't be. "Sir, are you questioning whether the plaintiffs have standing to bring this case today?" and "I question whether they're Florida residents!" THIS IS WHAT AN ASSHOLE LOOKS LIKE.

5:18 p.m.: YOU KNOW WHAT IS TRUE, SAYS STAVER? ALL THOSE STUDIES SAYING THAT GAYS ARE LESSER PEOPLE WITH BIG DISEASES AND SOCIAL ILLS. OH, FUCK OFF.

5:24 p.m.: I CAN'T EVEN WITH STAVER'S TAIL-CHASE. Also, apparently some people have been thrown out of the courtroom overflow area. MEANWHILE, STAVER IS SAYING THAT GAY RIGHTS ARE NOT FUNDAMENTAL RIGHTS. "UNORDERED CONCEPT OF LIBERTY" HAS BEEN SAID. "ISN'T THAT THE SAME ARGUMENT FROM LOVING V. VIRGINIA?" ZABEL ASKS. Staver is trying to say that interracial marriage only happened when the U.S. Constitution was amended to include black people. Thanks, Mat. Your clinical concept of history is inspiring.

5:28 p.m.: PROCREATION AND THE STABILITY OF MARRIAGE. FUCK OFF. "Not all heterosexual couples that marry intend to procreate," says Zabel. Uh, Staver's response? You can annul marriages if your other half doesn't want babies.

5:30 p.m.: "The plaintiffs agree with you, that it's a good thing to get married," Zabel shoots and scores.

5:32 p.m.: If you do this, "marriage really becomes nothing," says Staver. IT HAPPENED IN SCANDINAVIA! "This is a HUGE CULTURAL SHIFT," Staver doomsdays. Yes, yes it is.

5:38 p.m.: UGH, FIVE MINUTES FOR A HOLY ROLLER WHO WANTS TO TELL THE COURT THAT THIS HEARING IS TOO NEW. "With all due respect, this case was filed in January." It was the state's choice to only join the case last week. OMG, THIS GUY IS ABOUT AS UNPLEASANT AS ANYONE CAN BE. It's only been a five-six months! Bondi just got in a week ago! Too many issues! SIT DOWN.

5:40 p.m.: THE STATE AND CLERK HAVE NOT ASSERTED ANY FACTUAL DISPUTE, SAYS PLAINTIFF ATTORNEY. FACTS FROM PLAINTIFFS FILED IN MAY, SO STAVER'S ARGUMENT IGNORES THOSE AFFIDAVITS. PLEASE LET ZABEL RULE ON THIS TODAY.

5:42 p.m.: It's already been found that these "studies" are "entirely unbelievable" in a court of law, in several courts of law. We fought this shit during adoption.

So, the takeaway here is, at least to these eyes and ears, that the state and the bigots were shut down. We'll see how long it takes Judge Zabel to move forward and keep you posted. WHAT A DAY!