YOUR DAILY WEEKLY READER: idiots with guns, jerks on immigration 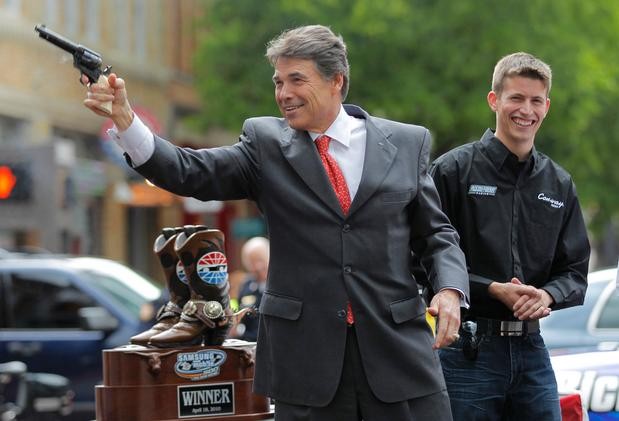 RICK SCOTT IS A GUN’S (AND GUN OWNER’S) BEST FRIEND. THE REST OF US? NOT SO MUCH: “Gov. Rick Scott appears nearly bulletproof right now in the eyes of the National Rifle Association. That assessment of Scott comes as the NRA notes that more pro-gun bills have been signed into law in the past four years than during any other recent single gubernatorial term. The organization sent a message to members applauding Scott for setting the record. Since taking office in 2011, Scott has signed into law 12 gun-related measures backed by the NRA. That total is nine more than former Republican Gov. Charlie Crist approved while enjoying an equally Republican-dominated Legislature between 2007 and 2010. Crist is now running for the Democratic nomination to face Scott in the November elections. The total number of Scott’s signings remains two fewer than those inked by former Gov. Jeb Bush, who also affixed his name to a one-year record six pro-gun and pro-hunting bills in 2006. A year earlier, Bush had signed the Stand Your Ground law. However, Bush’s overall total of 14 new pro-guns laws came during eight years as the occupant of the Governor’s Mansion. “Governor Scott supports the Second Amendment, and works every day to ensure Florida families are kept safe,” spokesman John Tupps said in an email. “Florida is at a 43-year crime low, and Governor Scott will review any legislation that the Legislature passes and sends to his desk.” The bills signed by Scott have ranged from the highly contentious, such as the “docs vs. Glocks” law in 2011, which restricts how doctors can talk to patients about guns and that has been on hold since being thrown out by a federal judge in 2012, to less controversial laws that reduced the fees for a new concealed carry weapon and allowed tax collectors’ offices to handle concealed-weapon license applications. “The bills that Gov. Scott have signed will make and have made an enormous difference,” said Marion Hammer, the powerful lobbyist for the NRA and Unified Sportsmen of Florida. “These laws will have a major impact on law abiding gun owners.” (via Florida Times-Union)

SO, THIS MOUNTING CRISIS OF FLEEING YOUTH – MANY DYING IN THE PROCESS OF TRYING TO EMIGRATE TO OUR BORDERS – IS PROBABLY SOMETHING WE SHOULD DEAL WITH, RIGHT?: “Anthony O. Castellanos disappeared from his gang-ridden neighborhood on the eastern edge of Honduras’s most dangerous city, so his younger brother, Kenneth, hopped on his green bicycle to search for him, starting his hunt at a notorious gang hangout known as the “crazy house.” They were found within days of each other, both dead. Anthony, 13, and a friend had been shot in the head; Kenneth, 7, had been tortured and beaten with sticks and rocks. They were among seven children murdered in the La Pradera neighborhood of San Pedro Sula in April alone, part of a surge in gang violence that is claiming younger and younger victims. The killings are a major factor driving the recent wave of migration of Central American children to the United States, which has sent an unprecedented number of unaccompanied minors across the Texas border. Many children and parents say the rush of new migrants stems from a belief that United States immigration policy offers preferential treatment to minors, but in addition, studies of Border Patrol statistics show a strong correlation between cities like San Pedro Sula with high homicide rates and swarms of youngsters taking off for the United States. “The first thing we can think of is to send our children to the United States,” said a mother of two in La Pradera, who declined to give her name because she feared gang reprisals. “That’s the idea, to leave.” Honduran children are increasingly on the front lines of gang violence. In June, 32 children were murdered in Honduras, bringing the number of youths under 18 killed since January of last year to 409, according to data compiled by Covenant House, a youth shelter in Tegucigalpa, the capital. With two major youth gangs and more organized crime syndicates operating with impunity in Central America, analysts say immigration authorities will have a difficult time keeping children at home unless the root causes of violence are addressed.” (via New York Times)

ONLY IF BY DEALING WITH IT YOU MEAN THROWING UP YOUR HANDS AND LEAVING IT IN THE ABSTRACT: “Sen. Marco Rubio in an interview today said the children who have shown up at the U.S. border must be turned back. "We do have to treat people the way Americans always treat people, with the highest level of compassion and care," he said on the Michael Medved radio show. "But they will have to be returned because that is the law. If you don't apply that, as heart breaking as it may be, you are basically telling another 80,000 people to try to come." Sen. Bill Nelson, in an interview with the Tampa Bay Times, effectively echoed those remarks, but also said the problem lies in federal budget cuts to drug interdiction that has empowered drug cartels. Some other Democrats have said the U.S. should not send children back into dangerous situations. Federal law signed by President George W. Bush expanded protections for children who cross the border, preventing speedy return. Nelson does support Obama's budget request to deal with the situation. Rubio's position is less clear. He told reporters yesterday "given the mood here in Washington, I don’t have confidence" Obama's $3.7 billion request will get approval. And on the radio today Rubio cracked, "Like every other problem the country faces, he just wants a bunch of money to deal with it." But Rubio went on to say that money is part of dealing with the children and the overall problem.” (via Tampa Bay Times)

YOU GUYS, THE BAD POLITICAL THEATER SHOW IS ABOUT TO BEGIN (AGAIN)! PICK YOUR FAVORITE IDIOT: “Can Rick Perry – the one-time laughingstock who couldn't overcome uncountable gaffes and wildly uneven stump performances to become the Republican nominee in 2012 – be the Republican party's great red hope in 2016? Given a schizophrenic GOP and a political climate where one word – jobs – can trump most every concern, the answer, let me tell you, is ... let's see ... sorry ... oops ... yes! And it's precisely because his policy positions are as wildly unpredictable as his debate performances. Take immigration, the very issue that helped sink Perry two years ago but has now brought him into the national consciousness with a force that seems to have stunned even Perry himself. He has managed to simultaneously accuse President Obama of causing the humanitarian crisis at the border and pledged to work with the administration to alleviate it, handshakes on the tarmac and all. It's a we'll-see-about-that situation if there ever was one, but at least it shows a modicrum of flexibility. If Perry can project a relationship with Obama of fruitful contrariness – I don't like you, but I'll deal with you if I have to – he will have hit on an enviable political sweet spot where he can be neither faulted by the hard right for being too much in the president's pocket nor written off as an obstructionist scold with a legislative resumé written largely in the language of "No". By contrast, the junior Wacko Bird from Texas, Ted Cruz, will be popular only as long as GOP voters are day-dreaming about anybody but Obama in the White House and not making plans to actually accomplish anything. Against the rest of an already crowded 2016 field with a precise preference for the increasingly unpopular Tea Party, their way and the highway, Perry's amalgam may prove strangely appealing: topsy-turvy positions on immigration reform, Obamacare and even prison reform – plus his uncanny inability to turn anything into a conversation about jobs jobs jobs – just might make him the lunatic they're looking for. Are you not entertained?” (via the Guardian)