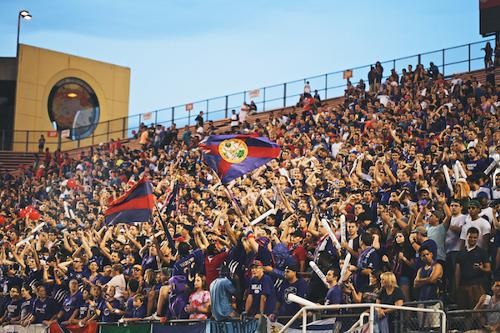 Four Orlando City Soccer fans were arrested for disorderly intoxication and battery of a law enforcement officer at a Tampa Bay Rowdies game on Sunday, July 6. During the match, the OCSC fans, who travelled to Tampa via bus for the game, out-rowdied the Rowdy's fans, using smoke bombs (that ended up starting fires) and hitting an officer in the head with a flag. The four fans who were arrested have been banned from future Orlando City Soccer games until their legal proceedings are settled.

In a prime example of one bad apples ruining the whole bunch, these four men weren't the only ones who felt the repercussions of their drunken antics on Sunday. In an open letter posted on the Orlando City Soccer Club website, founder and president of the Lions, Phil Rawlins, suspended both of the club's supporter groups: the Ruckus and the Iron Lion Firm.

"Orlando City is proud of the reputation it has built in the community and will not allow a small number of fans involved in unsavory behavior to tarnish our organization. For these reasons the Club, following consultation with local law enforcement and Major League Soccer, has taken immediate action which includes (but is not limited to) the following steps:

Members of both supporter groups will still be allowed to attend the games until the above issues are settled.

Are you a member of either the Ruckus or the Iron Lions? Tell us what you think about this situation in the comments below.