July 11, 2014 at 1:42 PM
comment
Friday's here! Friday's here! We know what that means: you're clock watching hardcore today, waiting for the seconds to tick down so you can tear outta the office and hit your favorite happy hour. These links should help you kill the minutes 'til drinkin' time:

via 1. Remember Choco Tacos? Well, imagine them in cappuccino form. A gas station in Lake Placid, N.Y. is offering its patrons just that. Imagine it: chocolate, vanilla, waffle cone, peanuts and caffeine? The only downside is that the drink is hot. We can fix that. Use an actual Choco Taco as a cross between a convenience store affogato/biscotti: Bam! cool drink.

via 2. This week, we discovered a tumblr account that discusses women whose stories aren't quite up to Disney princess standards. Each would-be  princess comes with an brief overview of her story, along with a Disney-style portrait. Our favorites include Wu Zetian, the first and only female Emperor of China (who is pictured above killing her infant daughter; not very princess-y), and Sita, the blues-singing princess. Some of the rejection suggestions are completely ludicrous, though: Lolita would never even make it to Disney's "maybe" pile. 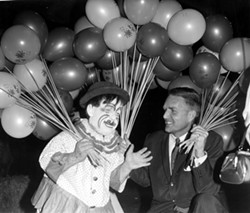 15 creepiest photos of clowns from Florida’s past

3. Who knew Florida was home to such creepy clowns? In this gallery from the Florida State Archives, we take a look at 15 of the most unsettling pics from Florida's clown-rich history. Seriously, though, who thought No. 3 was anything but terrifying?

via 4. Florida's a notoriously quirky state. The SunShame State celebrates our states quirkiness in a completely loving way. Florida girl hosts Allison Huntley and Camilo Fontecilla tackle the weirdness on living in Florida in their satirical podcast. Floridians will get a kick out of their off-mic lives and genuinely ridiculous reactions to the genuinely ridiculous things that happen on the daily in Florida. You can find the show on iTunes, Stitcher and Soundcloud. 5. Fans are rabid about Orange Is the New Black.  A completely different set of fans are crazy for Frozen. The two worlds collide in Frozen Is the New Black. Elsa lands in prison and meets a collection of princess-prisoners, including Mulan as Soso and Merida as a Scottish Red. Our favorite parts? Gaston as Pronstache and Snow White as Morello.