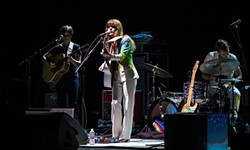 With her first new album in six years coming out at the end of this month and some recent touring, this latest leg supporting Ray LaMontagne (July 11, Bob Carr Performing Arts Centre), Jenny Lewis is back to rekindle the dormant embers of her music career. Even in spite of some early sound issues, she and her band played an elegant set that mixed some new songs (opening with her brand new single “Just One of the Guys”) with much of her most prime work and even a toe-dip into Rilo Kiley material like “Silver Lining,” perhaps the most perfect song she’s ever penned. And even though she brought a bigger band than the headliner – at six strong – one of their best moments was when they all just huddled around arm-in-arm to vocally accompany her and an acoustic guitar on the song that name-checks Orlando Thanks to the commenter who pointed out this was actually a revised version of "Acid Tongue").

In the Orlando streets: Jenny Lewis at Bob Carr PAC (photo by me)

There’s a lot of style that goes into what Jenny Lewis does, from the golden tones of her Cali-cool steeze to being the de facto majorette of indie coquettishness. But despite her soft-core flair, and the baggage of some peripheral Hollywood fame, she still manages some real, natural soul and even some respectable rock and roots. The gestalt is a particular space entirely her own. Even with somewhat muted sonic and visual treatment, this performance weaved some rich nuance, proving the craft behind her work. And it wasn't really until I saw her onstage again this time – with a shine that radiated more from plainspoken gravity than cutie-pie affectation – that I fully realized how good it was to see her back on the scene. 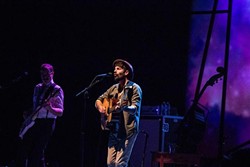 Braiding his pop music with a rootsy sensibility and white-guy soul, headliner Ray LaMontagne is nothing if not a detailed and honed craftsman. Though his sharp but square adult-alternative styling isn’t especially my bag – and the fact that he’s one of those guys whom you suspect wears a back-canted brim hat all the fucking time – at least he’s not one of those half-cooked indie hypnotists who skirt by under the guise of arty impressionism. Yeah, you, Bon Iver.

Ray LaMontagne at Bob Carr PAC (photo by me)

Holy shit, this picture makes it look like his guitarist’s head just exploded! But it didn’t – dude’s OK. Nothing quite that exciting happened. But sizzle isn’t really in LaMontagne’s mission, and it didn’t particularly factor into his set. It was, however, a fine-cut, professional performance.

PUP bites back at OW