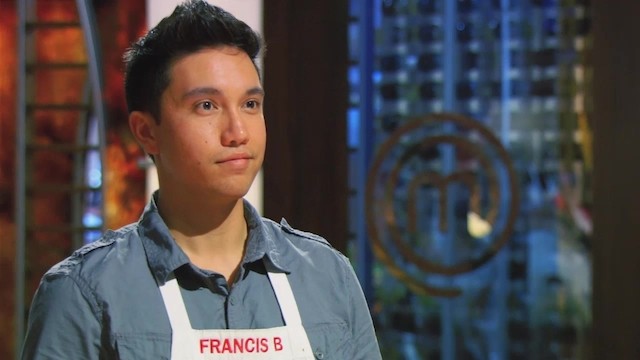 Just one week after helping to declare a winner (and three losers) at our Bite Night Celebrity Chef Challenge, Francis Biondi was sent home on MasterChef. On the July 7 episode, spring rolls (with greasy dough and inconsistent filling) were the instrument of Orlando's Biondi's destruction.  "I've been practicing ever since. I've made so many spring rolls I could open up a food truck and kill it now," he told the Orlando Sentinel. We could totally get behind an all-spring roll food truck, especially if dessert spring rolls are an option.

Taking advantage of his MasterChef fame while it's still hot, Biondi launched a website called Cooking with Confidence. Right now, he's got two recipes available: a delicious-sounding heirloom tomato salad with fried goat cheese and pesto and, of course, a spring roll filled with pork and shrimp. Each have fantastic instructional pictures and a conversational tone that feels as if Biondi was giving you a private chef's lesson. The only downside? Both recipes involve frying, which, since the Great Grease Fire of Ought Two, has been banned in my house.

We're pretty excited to see what other recipes the golf pro turned home chef turned MasterChef finalist comes up with; it could be an excellent springboard for another Orlando-based cookbook.

If you wanna offer Biondi your reality show related sympathies or let him know how his recipes turned out when you tried them at home, you can catch him serving up delicious bites at Txokos at East End Market. If you wanna keep an eye on the eventual winner of the MasterChef crown, the show airs at 8 p.m. Mondays on Fox.