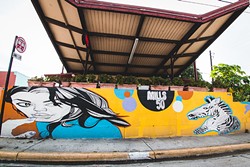 Housed in a former gas station, Forbidden City  has been a part of the Mills 50 landscape for more than 27 years. After this fall, the iconic building will no longer be home to the Chinese restaurant, as the new owner of the building will not renew their lease.

Online reviews for the long-standing spot have varied wildly over the past 27 years, ranging from awesome ("This is my favorite restaurant in Orlando, hands down. And I don't want that to be a phrase taken lightly. I've made it a point to try most restaurants in the area, but this place takes the cake." – John A.) to awful ("The dish was so unpleasant I thought I might have to throw up afterwards." – MegKat).

Not limited to online reviews, Forbidden City even got a mention in Eddie Huang's Orlando-centric memoir, Fresh off the Boat. Huang remembered their sesame chicken as "ethereal." He and his family would stop at the restaurant about three times a week on the way home from school. According to Huang, "There wasn't anything else worth eating there. Even the General Tso's, which had a similar technique [to the sesame chicken], was nasty." Based on that tip, our food editor gave it a try and while the sesame chicken was heart-attack-on-a-plate great, the ramshackle condition of the building gave her some cause to wonder what kitchen conditions might be like.

The new owners of the building already have a tenant in place for when the lease runs out in the fall. No word on if the owners of Forbidden City plan to find a new location or close the restaurant for good.