Orange is the new slut: Probing “The Hotwives of Orlando” 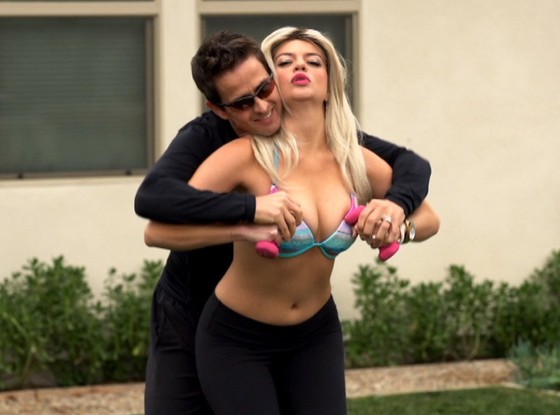 One of the pleasures of living in a tertiary market is recognizing that your city’s very name is a universally understood punchline. This is one of the ace cards held by The Hotwives of Orlando, the reality-series parody that became available yesterday on Hulu. As the first episode opens, an unseen narrator welcomes us to a world of unparalleled allure:

Mario Lopez once said, “Orlando is the most glamorous city in the world.”

I’m just a small-town girl who dreamed of the big life. And now, here I am – in ORLANDO!

But how much Orlando is there in these hotwives, anyway? Based on the first two episodes (an additional five are viewable if you subscribe to Hulu Plus), the answer is “More than a smidge, less than a crapload.” More interested in sending up the housewife programming genre, per se, than the City Beautiful in particular, the show nonetheless gets off some good geographically specific zingers – a few of which succeed to a degree I’m not sure even the producers understand.

For one thing, the set dressing is spot-on. The interiors of the housewives’ McMansions look just right – which is to say that they all look like the clubhouse at an Altamonte Springs apartment complex. Sure, part of me was pining for something more Queen of Versailles-ish, but who has that kind of budget? (Nobody, come to think of it.) 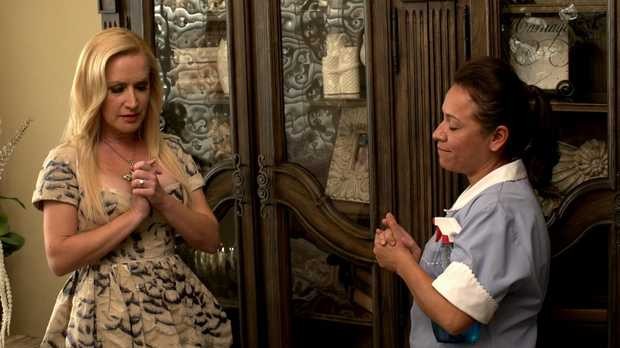 The sociological underpinnings are pretty firm as well. I howled when a character was introduced as being from “one of Orlando’s oldest and whitest families.” And our area’s confluence of conspicuous consumption and whackjob religion is embodied nicely by Crystal Simmons (The Office’s Angela Kinsley), a fundamentalist ditz whose husband uses the Bible to manipulate her utterly – succeeding in part because he forbids her to actually read the thing. As she explains, women just aren’t equipped to interpret a book that’s “written in Jewish.”

Unfortunately, you don’t have to have lived in Central Florida very long to spot the missed opportunities as they go sailing by. Another husband works as the mascot for a basketball team, but his character is an elephant and the team color is purple. Surely a more overt allusion to the Magic wouldn’t have confused anybody in Los Angeles? They’ll recognize the show’s exteriors, though, since the stock shots of “landmarks” like Lake Eola are all that counts as “location” footage. (The series is shot in L.A.) Worse still, the personal trainer who’s banging Tawny is played by New Kids on the Block’s Joey McIntyre. Come on -- somebody from the Lou Pearlman stable had to be available!

Generally speaking, the comedy is pretty inconsistent, even when it doesn’t have local authenticity to worry about.  In one of the best running gags, the African-American hotwife, Phenomenon Reed (Tymberlee Hill), gets away with making all manner of denigrating remarks under the excuse that she’s “gotta be Phe Phe”; meanwhile, her Caucasian counterparts’ complete lack of umbrage indicates that they’ve gotta be swimming in white guilt. On the other end of the scale, the most grating bit has one of those counterparts, Veronica Von Vandervon (Andrea Savage), speaking in smutty double entendres that she somehow feels the need to explain over and over again to anyone who’s listening,. Will Ferrell excels at this sort of character – the dullard who inexplicably thinks he’s the cleverest guy in the room – but so far, Savage has neither the material nor the ability to pull it off.

Don’t get me wrong: The Hotwives of Orlando made me laugh -- just not often enough to make me want to sign up for Hulu Plus. The show is a fun diversion for a little while, but nothing you’re going to want to make an immediate and lasting commitment to. In that respect at least, it’s Orlando all the way.

Days without a response from the publication that plagiarized from me and won’t come clean: 391.