It’s July, all the nights are hot. But last Friday (July 18) was hot in the good way, and the heat was concentrated on the Mills Avenue strip.

Body//Talk is a local events group that’s been making progressively bigger waves and is beginning to do some prime-time underground stuff. They’re on the DIY side of the party and beat scene, springing from the house-party circuit to become an itinerant, shape-shifting thing that now roams real venues and takes over different spots around the city.

Their latest, well-populated event (Peacock Room) was headlined by L.A. producer Spazzkid, who’s been catching buzz with a signature blend of electronic pop, J-pop and beat music. On record, his music clicks and beams with positivity. On stage, his presence practically levitates. Once the music drops, his soul generates joy like a power plant, bursting beyond his own body and filling the room and every dancing body in it. Debate how much live playing he does if you want, but his live incandescence is undeniable.

Also making some scene sparks is opener Dromes, the solo electronic project by overflowing local talent Chandler Strang (also known for fronting actual bands like Case Work and the nationally released Saskatchewan). Like many niche genres, house music can be hard to dissect for outsiders. But being a former insider, it’s something I know a thing or four about. And even though Strang’s directly ripping sounds that have been around for over 20 years, his pop intelligence still shines through here and makes it special with a musician’s melodies and sharp beat architecture.

Dromes at the Peacock Room (photo by James Dechert)

More than just a live show with a dance party pulse, Body//Talk’s events are an alternative to both the bro-thick musk of the mainstream dubstep scene and the judgment-heavy, often stiff and sometimes aggressively pretentious underground rock scene. The communal vibe this night was cool but not too cool for school, which makes all the difference in the world. They’re part of a new tide of the underground dance tradition where the spirit of the event is the event, and they’re making some things happen. 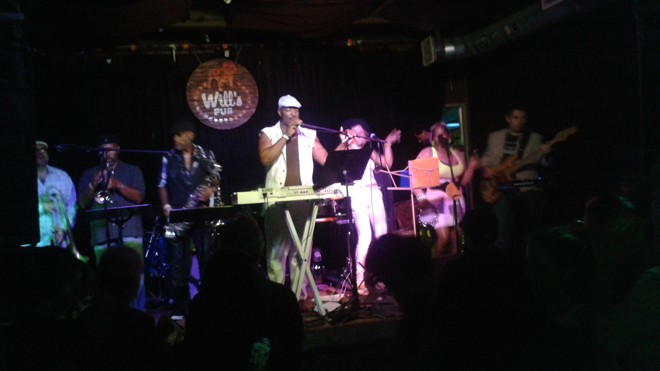 Square Biz at Will's Pub (photo by me)

Down the street (Will’s Pub), an O.G. Orlando events group, Phat-N-Jazzy, was also moving bodies with their own fresh spin on an old form with a themed night focused on ‘80s soul. Even though it’s deeply embedded in our DNA, the sweeping new paradigm of the ‘80s that brought game-changers like new wave and hip-hop tends to eclipse that decade’s soul and R&B in the musical discourse. DJ BMF’s response? Organize an entire event honoring it with his own pacesetting mixes, vintage video projections and a whopping nine-piece band (Square Biz, an amalgam of the Gerry Williams Band and the Legendary JC’s). BMF’s one of the city’s best theme event-makers and this one was on a deluxe scale. And it was an ass-shaker that celebrated the funkier side of the ‘80s.

In an always thought-driven journey through the live music scene, it’s nice once in a while to be among those who haven’t lost sight of the most primal way to enjoy music: dancing. Between two different events of two different age tiers, that urge and heart was the same. And on this night, all was right in the world.

The Return of Jenny Lewis