LeakyCon casts a spell on Orlando 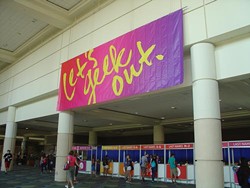 A massive banner with the LeakyCon tagline animated the check-in area.

“Let’s geek out” is the tagline for LeakyCon — a magical fan conference that graced the Orange County Convention Center last week. The convention originated as a bookworm and film fanatic haven for Harry Potter enthusiasts, but has grown to encompass more than the wizarding world—hosting five conventions on two continents in the past six years. This writer was lucky enough to attend the third day of LeakCon’s tour in Orlando and saw firsthand how geeky geeks can be.

Spirited cosplay aside, Friday’s itinerary was festive and jam-packed with events, from potion lessons with Hannah Hart, a school reunion with Hogwarts alumni and an evening rock concert with Harry and the Potters. A series of discussions and games were also held throughout the day; a few highlights of mine were Wizard Warz, a dueling tournamentwith interactive wands and A Downton Discussion, a fancy tea party for Downton Abbey fans to mingle and vent over plot twists.

During her autograph signing, Hannah Hart took a selfie with her fans.

LeakyCon took over three floors of the Convention Center’s West Concourse, with the busiest districts being the main stage and marketplace. A main stage event that morning was a live set by Not Literally—a performance group that creates parody songs and comedy sketches around fandoms. Band members, Ginny DiGuiseppi and Dana Ritterbusch sang a couple of their Potter-inspired numbers, including “Ravenclaw”and “Walk of Shame.” Another main stage program was a panel and Q&A with four stars of the paranormal TV series, Supernatural—which is approaching its tenth season.

Ginny DiGuiseppi and Dana Ritterbusch of Not Literally perform their Potter-inspired parodies.

The marketplace was the bustling hub of LeakyCon, with vendors bringing the tales of J.K. Rowling to life; attendees could purchase wizard supplies at the Hungarian Wand Shop or Hogwarts’ uniforms at the Golden Albatross. Towards the back of the marketplace, lines went on for miles to score autograph signings and photo booths with feature actors and artists. Thanks to my press badge, I snagged a photo op with Dayeanne Hutton and James Brent Isaacs of Emma Approved—a YouTube series based on Jane Austen’s Emma. The lines were exceptionally long for the six Harry Potter actors in attendance and Team StarKid, the masterminds behind A Very Potter Musical.

One of the marketplace vendors, Hungarian Wand Shop specialized in wooden magic wands.

One of the Harry Potter actors, Nick Shirm (Zacharias Smith) autographs a Deathly Hallows' movie poster for a fan dressed as Luna Lovegood.

Aside from a memorable afternoon of embracing my inner geek, LeakyCon announced a milestone of its own on Sunday, the last day of the convention. The organizing team plan to host two seperate conventions in the near future: GeekyCon as a multi-fandom event and LeakyCon as an immersive Harry Potter-only conference. The convention expansion is slated for 2015, but until then, these pics of killer cosplay will have to hold you over.