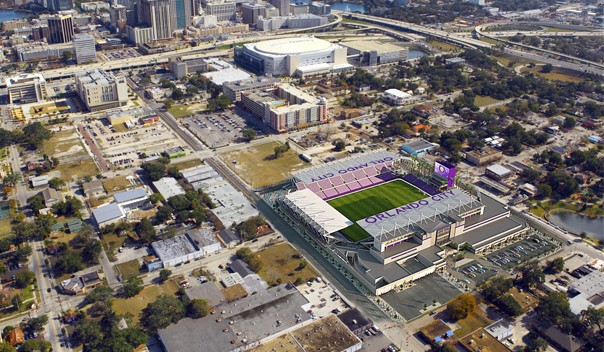 You know that thing the city does when it doesn't get its way? How it screams "eminent domain" and waits for you to cower beneath the weight of its legal team, eventually allowing the city to buy you out at a cut rate? Well, that didn't quite work out when Faith Deliverance Temple – which sits on the original planned new soccer stadium site – summoned the heavens and told the city, "no thanks, $4 million is a joke." Well, today the city backed down (for once) and decided to shift the stadium over a little so as not to piss off anyone else in Parramore. The suit has been dropped, accordingly, and now everyone is happy (allegedly). Below is the statement from Orlando City Soccer HQ.

“We applaud the Mayor for finding an alternative solution that is a win for everyone involved,” said Rawlins. “The new location allows us to remain on schedule to play our matches in the new stadium starting with the home opener in 2016. Our fans will benefit from added amenities created by the new location such as more entertainment areas prior to and after the matches.

“Importantly, this is also a win for the community of Parramore. Orlando City is committed to Parramore’s future and we will serve as a role-model for service and citizenship. We have a proven track record of delivering on our promises, and we look forward to working closely with our community partners.”

The basic design of the stadium remains unchanged, with initial seating expected for approximately 19,500 fans, a dedicated supporters’ stand, club and suites, and the larger-than-life-sized lion statue overlooking all the action!

The new site will enhance the match day experience by creating:

Dedicated to the Past and Future of Parramore:

Rawlins continued, “We recognize the rich tradition of the community and its deep connection to residents. Therefore, we will incorporate elements into the stadium, such as the Carver name in respect to the legendary theatre that resided on the site many years ago, to honor the heritage and educate visitors on the history of Parramore. Also, the Orlando City Foundation will continue to expand its work within the community.”

Orlando City announced it will form a committee of Parramore leaders, including District 5 Council Woman Regina Hill and Florida State Senator Geraldine Thomspon, to help stadium designers incorporate elements of the community into the structure.

The Orlando City Foundation, a 501(c)(3), is an ardent supporter of Parramore organizations like the Parramore Kidz Zone, New Image Youth Club, Summer of Dreams, Parramore Comprehensive Neighborhood Plan and others, helping to raise funds, donating equipment and volunteering time throughout the year.

Most recently, the Foundation’s free soccer clinics in Parramore have drawn hundreds of kids throughout the summer, introducing them to the game of soccer while teaching the importance of good nutrition.

UPDATE! HERE'S A LETTER THAT MAYOR BUDDY DYER SENT TO "COMMUNITY LEADERS" ABOUT TODAY'S DEVELOPMENTS. UM, IT'S FORMER COMMISSIONER DAISY LYNUM'S FRIENDS AT THE BLACK BUSINESS INVESTMENT FUND THAT WANT TO LIQUIDATE THE PROPERTY. YOU'LL RECALL THAT THE BBIF HAS BEEN MIRED IN CONTROVERSY AND ALSO (AND ALSO!) WAS GOING TO DEVELOP THE CARVER THEATER THERE. OH, AND ONCE MAGIC JOHNSON WAS GOING TO MAKE THINGS HAPPEN THERE, TOO, BUT ALL FOR NAUGHT. INSTEAD OF SPENDING $4 MILLION ON EMINENT DOMAIN, THE CITY - VIA THE COMMUNITY REDEVELOPMENT AGENCY - WILL SPEND $2 MILLION FOR THIS DEAD PARCEL. UGH:

I wanted to provide you an update on our Major League Soccer stadium.  Today we announced we are dropping the eminent domain case, shifting the site of the soccer stadium slightly west, and we will break ground in the fall ensuring the Orlando City Soccer Lions will play the 2016 season in their new home!

Most of you have followed the City’s effort to purchase Faith Deliverance Temple as the last parcel of land for our Major League Soccer stadium. From the very beginning the discussion with the Williams Family was always about relocating the church and the value of the land.  Just recently, the Williams Family announced for the first time that they were not interested in relocating.

With this in mind and the unpredictable cost and timeline that could come with the legal proceedings, we began to question whether there was an alternative site for the soccer stadium.  Around this same time, the Black Business Investment Fund (BBIF) expressed interest in selling the property at the corner of Church Street and Parramore Avenue back to the City. Until that time, we had not considered the property to the west in the development of a new stadium.

Last week, we finalized the final sale of the BBIF property.  With this purchase and a thorough due diligence process completed just last week, we determined that shifting the soccer stadium to the west was possible and actually presents a better opportunity for the City, the team, Faith Deliverance Temple and our residents.

We are entrusted to be stewards of the taxpayer’s dollar and this new location will save the City money with a definitive schedule. This new site also allows for a larger footprint for the stadium and additional parking.

The corner of Church Street and Parramore Avenue, where the Carver Theatre once stood, has a long history as the center of entertainment and a gathering place for the Parramore community.  I am excited about the opportunity that this location will once again be the vibrant center of the Parramore neighborhood.

Thank you for your partnership as we work together to revitalize Parramore and host world-class sports and events for our residents.