via Nightmares at the Majestic

Terror on Church Street has been closed for 15 years, but Orlandoans still remember the place fondly as a year-round spot to get their adrenaline pumping. Some of the folks (including Head Makeup/Character Designer Alan E. Ostrander) behind the Church Street attraction are planning to pick up where Terror left off with a new haunted space they're calling Nightmares at the Majestic. The terrifying attraction, which promises “a total sensory overload of terror like you have never experienced before,” will take over the Majestic Event Center, located at 801 N. John Young Pkwy.

The new haunt will be open for 24 nights in October, joining other annual scare-fests Halloween Horror Nights and A Petrified Forest. Right now, very few details are known about the house and the story it will weave to frighten guests, however, they are hoping to make everyone's bad dreams come true. If you want a little preview, you can see some concept art on their Facebook page.

Right now the team putting this together are in the middle of some pretty heavy fundraising, with an IndieGoGo campaign that ends in 12 days and a launch party and fundraiser happening this Saturday. Each means of donation comes with an entirely different set of perks: Donate on IndieGoGo and you can score such perks as tickets to the event or a severed ear or finger. Go to the launch party at 8 p.m. Saturday at the Majestic Event Center and you'll get a sneak peak of what to expect from the new haunted house.

If you're interested in doing some work behind the mask, Nightmares at the Majestic are holding scareactor auditions next month. 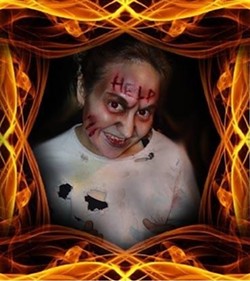 Image via Nightmares at the Majestic