Today, the Orlando Sentinel ran an interview with Jim Atchison, CEO of SeaWorld Entertainment Inc., who says that the theme park giant should have fought harder against claims made in the controversial documentary Blackfish. Atchison, who says the movie was "so misleading, so full of falsehoods," says the parks should have come out more forcefully against it. However, as we pointed out in our blogs in July 2013, SeaWorld did come out against the film pretty forcefully, with a scathing letter that denounced the film as propaganda before it was even released.

"Although Blackfish is by most accounts a powerful, emotionally-moving piece of advocacy, it is also shamefully dishonest, deliberately misleading and scientifically inaccurate," the parks wrote in a letter to film critics last summer.

And that shot across the bow was just the beginning of an anti-Blackfish PR campaign that may have actually done more to help push the movie into the spotlight than it did to defang it. The movie went from being a relatively unknown doc to being one of the most talked about docs of the year, and it seemed that the more effort SeaWorld put into fighting Blackfish's message, with videos, interviews and advertisements attempting to discredit it, the more the film seemed to resonate with audiences. Recently, SeaWorld announced that its stock had dropped nearly 33 percent, in part due to the Blackfish effect. A New York City law firm announced earlier this week that it is preparing for a potential class action suit against the park to help investors recover some of their losses.

Even SeaWorld's recent announcement that it plans to enhance its habitats for killer whales doesn't seem to have lessened the Blackfish blowback – though Atchison tells the Sentinel that the park's decision to more than double the size of the whales' pens was not at all a response to criticisms stemming from the movie (he says the park is always evolving, and that the plans were in the works as early as 2010), people keep making that connection. He says the park simply wants to create a more "dynamic environment" for its animals and that the film had zero influence on the decision to make the improvements. 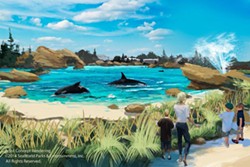 One thing that's tough not to notice about the Blackfish conundrum, however, is that SeaWorld has at times been its own worst enemy in this debate. While the film has been successful positioning itself as a champion for the animals, the park's responses always seemed to be a bit too calculated, less about the animals themselves than on the park's brand and reputation (themes that come up repeatedly in Atchison's interview). Would it have hurt for Atchison or others to make peace with some of the criticisms and to let the public believe that the new habitats for the whales were indeed created because the parks recognized that there was some validity to the notion that more space, more challenging environments and more enrichment would make the whales happier and healthier in the long run? Doing so might actually have softened the park's tarnished image just a bit.

You can read the complete Sentinel interview with Atchison here.

And we'll be publishing an interview with a killer whale expert Mark Simmons, who recently published a book called Killing Keiko, which talks about how the attempt to release the whale from the movie Free Willy into the wild went wrong. Simmons says he believes the backlash against SeaWorld is unfair, unfounded and misguided.

Also, you might take an interest in this piece from The Dodo from a former trainer of Tillikum, the whale responsible for the death of trainer Dawn Brancheau. He talks about the use of sea pens to give killer whales larger, more interesting habitats.