Learn the art of the spring roll with MasterChef's Francis Biondi

On MasterChef earlier this summer, it was a spring roll that proved fatal for Orlando chef Francis Biondi's reality show dreams. This weekend, he's facing his fears with a spring roll workshop where he hopes to right all his wrongs ... and teach you the art of the spring roll in the process.

Since his boot from the Gordon Ramsey cooking competition, Biondi has made (and shared) his share of redemption rolls: 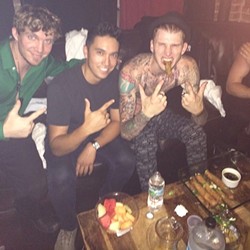 Machine Gun Kelly chowing down on one of Biondi's traditional fried spring rolls.
via Francis Biondi

On Saturday, Aug. 23 at East End Market, Biondi will be holding a spring roll workshop where you'll learn how to create four different spring rolls (including a dessert roll, mmm) and two dipping sauces. When you're done cooking, you and the rest of the rollers will get to eat the fruits of your labor. That's the best (and tastiest) part.

And if you just can't get enough of Francis Biondi, keep an eye on the East End Market website. He's got a traditional Filipino feast coming up in September. Think: banana leaf-lined tables, filled with rice, pork adobo, whole fish, longganisa and other Filipino specialties.