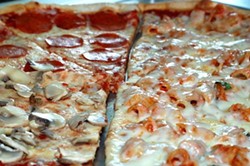 1. First there was the Burweedo. Now, marijuana pizza is on its way. Unique Pizza and Subs, a Pittsburgh pizza chain, has begun work on a weed-infused pizza sauce. Sadly, it looks like it won't be sold in the states any time soon, but our good neighbors to the north should be able to both generate and satisfy their munchies at the same time. Unique's biggest shareholder, who resides in Canada, is interested in buying the rights to the marijuana-spiked pizza.

2. If you use Spotify, you can already see what your friends are listening to (and judge them!) With Spotify Serendipity that same technology has been harnessed to show when two people start the exact same song within a tenth of a second of each other. Right now the site's not showing real-time activity, but just a slice of the day on Aug. 20. It's more of a novelty than anything, but it's mesmerizing to watch.

3. Like we mentioned above, this week has been brutally hot. What better way to virtually cool off than with this gorgeous gallery filled with underwater shots by Silver Springs photographer Bruce Mozert? He's captured tons of below-the-waterline antics including archery, lawn mowing, tanning, playing cards and more.

Image via The Chive

4. Absolutely anyone who's worked in an office has dealt with an office food thief. This thief takes things a bit overboard. But, seriously, the sandwich-owner deserves it. He (or she) used comic sans for a very serious note.

5. Breaking Bad's Bryan Cranston and Aaron Paul are back together again. And this time? They're running a pawn shop where Julia Louis-Dreyfus is attempting to pawn one of her Emmy's. Stick through to the end. The twist is worth it (and adorable).