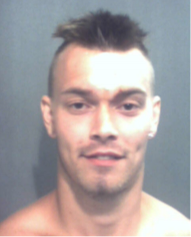 Photo via Orlando Police Department Today, Kody Roach was charged with murder in relation to an incident that happened early in the morning of Aug. 19 outside Vixen Bar in downtown Orlando. According to new documents released today, police were called to Vixen in response to a "gun wielding maniac" banging on the door of the bar. An intoxicated Roach had been ejected from the bar for belligerent behavior, the report says, and he responded by banging on the door with the muzzle of his gun. Then he went to get a slice of pizza then returned to the front door of the bar, where he was confronted by officers. Officers say he refused to comply with their orders to get down on the ground, so they attempted to use a Taser on him. The Taser didn't work, and Roach allegedly reached toward his waistband, so one of the officers opened fire. Nine shots were fired, five of which hit Roach. One hit a patron inside the bar, Maria Fernanda Godinez. She was killed by the bullet. Police say Roach is being charged with murder, even though his gun was determined to be unloaded, because as a result of his actions, an officer "had no choice but to use deadly force. as a result of Roach's actions, an individual was killed." Roach was also charged with attempted armed burglary and armed tresspassing. You can read the complete police report below: