VIDEO: Orlando grungy punk duo the Welzeins on Off the Avenue

The Welzeins spawned from the demise of the short-lived local power-pop group, Olympic, which formed after original Welzeins drummer Matt Rawls answered guitarist R.J. Nordstrom's Craigslist ad seeking a new bandmate. Since then, Rawls has left the Welzeins, but Nordstrom powered on (quite literally) with now-drummer Matt Wassum. Wassum said he was excited when Nordstrom approached him because he'd been an early fan of the band's electric live show, which is a furious onslaught of garage-tinged punk our live music columnist Bao Le-Huu describes: "It can go from Jay Reatard’s velocity to Hendrix’s fire with raw power. The result is all crank, no wank."

For their session on North Avenue Studios’ awesome live music video series Off the Avenue, the duo performed two songs off their debut, self-titled LP (released Aug. 1, 2014), "Zhark Attack" (above) and "Cigarette Girl" (below). The album was recorded in a wood shop out in an Oviedo industrial park, an indie effort with the help of Kyle Harms, Brandon Marcoux and Clay Arrighi. Although there are no shows currently planned, the Welzeins plan to perform the album more around town before embarking on a tour, likely next summer.

Orlando Weekly: What do you think is important in a live performance?

Nordstrom: Being natural. You don’t have to jump off the stage seven times, or climb up on your amps, or knock the drum kit over. Sure, sometimes that stuff can be awesome, but I feel like unless you are in the right environment it seems disingenuous, and the audience can sense that. At the end of the day, I like to play music that makes people move around. No frills, no trying to be a “rock star,” and no need for unnecessary bullshit.

Who is the best band you’ve ever seen live?

Nordstrom: More recently, it would probably be Thee Oh Sees. I saw them in Gainesville when they came through, and it was a sweaty, sweaty experience. Too much fun! I also saw the Dead Weather a few years ago. That one will always be a highlight. Allison Mosshart, man, she is seriously one of the best vocalists and performers I’ve ever seen live!

Do you have any gear that helps you achieve your sound?

Which comes first: the lyrics or the music?

Nordstrom: As far as my writing goes, they kind of happen at the same time but don’t necessarily get connected immediately. I’ll write lines down if I think of something cool-sounding, or I’ll sing a guitar part and record it on my phone. Usually I’ll forget about them, and then rediscover everything I’ve done over the course of a few weeks all at once. From there, I piece music and lyrics together and flesh everything out further at band practices until the song doesn’t suck anymore.

What album have you listened to more than any other album? What keeps you coming back?

Nordstrom: Probably Astro Coast by Surfer Blood. That one’s been in my top 10 for many years now. It’s one of the records that got me into the music I play and listen to these days. Besides having a lot of depth lyrically, the guitars have this sort of softness to them that hides how distorted they actually are. Cool stuff. Ty Segall’s Horn the Unicorn is also one of my favorites. Every single track is fantastic and the production is super raw – perfect for blasting out of my shitty car speakers. 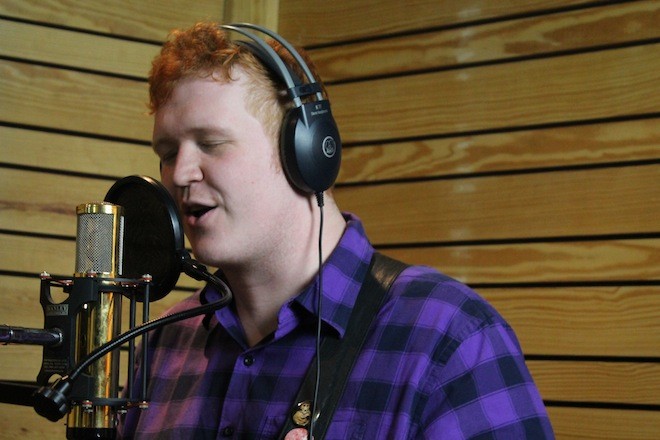 The first album I ever bought was Jet’s Get Born. It’s funny; a lot of critics shit all over that band and album, but when I ask people about the album these days it seems like everyone remembers it fondly. I recall the moment I decided to learn how to play guitar – it was from listening to the break in “Rollover DJ” in the car with my dad. I liked the tone of the rhythm guitar on that track a lot, and other rhythm players continued to be a big influence on me when I first started seriously listening to music.

Explain the meaning behind one of your songs.

Most of the songs we play are about dumb stuff

dads getting eaten by sharks, dying after running a footrace on every drug imaginable and expressing how much of a crush I have on rock stars who are cooler than me. Stuff like that.

What you’re listening to/loving most in music right now?

I like fuzz and spring reverb! Lately, some of my favorite artists have been Mac Demarco, Thee Oh Sees, Of Montreal and La Luz. [Locally:] Holy cow, there are too many to name! I’m a big fan of Me Chinese, Adam and the Plastic, Fast Preacher and the almighty Wet Nurse, among others!

Zhark Attack: Behind the scenes photos from the Welzeins' "Off the Avenue" session