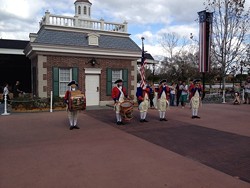 Aside from the obvious attractions, why do people visit Orlando's theme parks? I go to Magic Kingdom for nostalgia; Universal for Harry Potter; Animal Kingdom for sunstroke; and Hollywood Studios for as little as possible. Until today, I would have said I go to Epcot to drink, and enjoy live entertainment around World Showcase.

Well, I now have a few fewer reasons to visit the world's most expensive bar complex, as we pour one out for the long-running shows that are apparently leaving the park. Following a flood of social media postings from affected entertainers, theme park websites like WDWMagic and TouringPlans have reported -- and the official Disney Parks Blog has now confirmed -- that Walt Disney World has decided to cancel several of Epcot's best-known productions, with their final performances scheduled for late September.

Here's a breakdown of the shuttering World Showcase shows:

There is also buzz that the British Revolution classic rock cover band may also disband after 9/27, but that is currently unconfirmed.

The loss of these groups will be a blow to families who have enjoyed their talents for decades, and even more devastating for the dozens of entertainers who will now be looking for new employment. On the silver lining side, there is word that the acts will be replaced in the near future by some new productions:
We'll update you on details and debut dates for these new shows once they are announced. In the meantime, you still have a month to say goodbye to your favorite World Showcase performers, just in time for the start of the 2014 Epcot International Food & Wine Festival.