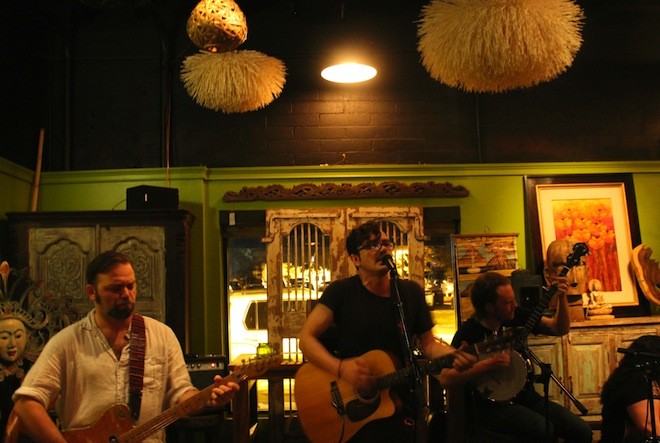 R.E.M. tribute night with (from left) Brian Chodorcoff, Stephen Rock and Wheeler Newman at the Imperial (photo by Ashley Belanger)

My second pop-in on a Modern Music Movement show was one of their special theme events, this one an R.E.M. tribute show (Aug. 28, The Imperial) highlighting the legendary band's early material. Unlike the regular, low-key Acoustic Soundcheck series that MMM holds at the Imperial, this concept show drew more intense traffic, the most bodies I’ve ever seen in here, actually. Probably in anticipation for that, the musicians set up in a different, more open corner of the room, which worked better, or at least as well as it gets for a crowded event in this densely furnished space. As good as this bustle is for business, it showed the limits on carrying capacity in terms of ambience for a place not especially built for live music. Depending on where you’re situated, you’ll either be able to take in the acoustic performance or be a casualty of the competing conversational din.

But on the positive side, local notables Stephen Rock, Brian Chodorcoff, Wheeler Newman and a revolving cast of accompanists did a quality job on the music. Besides, it was nice to be able to appreciate R.E.M.’s music anew as interpreted – pardon the heresy here – without the iconic but sometimes trying voice of Michael Stipe.

Orlando music from Obliterati to Sales