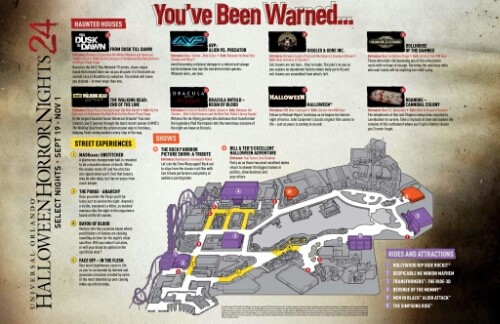 Image via Behind the Thrills

Halloween Horror Nights starts next week (Friday, Sept. 19, to be exact). If you like to maximize your time at the fright fest, you'll be stoked at what Behind the Thrills revealed last week. The theme park blog uncovered what they believe to be an official map of the HHN layout this year, including the super-helpful entrance and exit locations for each house.

Now you can decide whether to check out the vampires of  From Dusk till Dawn before running like a madmen from the Zombies of The Walking Dead and which way you should travel to hit all the scare zones. We know the map up there is tiny, so here's a list of where the houses enter and exit:

And here are the scare zone locations:

The only thing missing from the map is the showtimes, so you'll just have to figure out when to squeeze in Bill and Ted and Rocky Horror Picture Show when you get to the event.