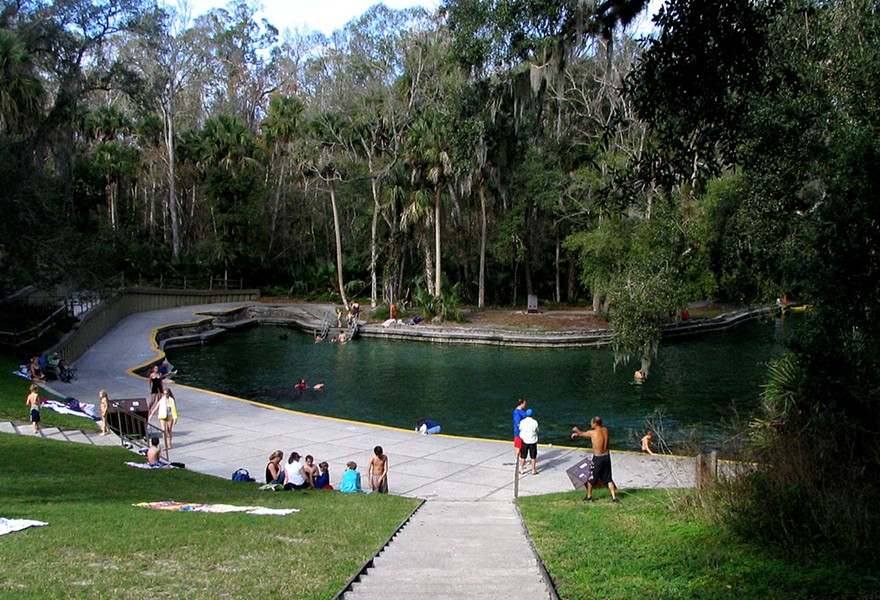 By JIM TURNER THE NEWS SERVICE OF FLORIDAMoney is now flowing toward 27 projects intended to improve some of the state's most endangered natural springs.The Joint Legislative Budget Commission, made up of House and Senate members, agreed Wednesday to use $25 million for a list of springs projects outlined last month by Gov. Rick Scott and the state Department of Environmental Protection. Lawmakers put the $25 million into this year's budget but still needed to sign off on the list.Combined with local contributions, nearly $70 million is expected to go to work on springs throughout Central and North Florida that have faced years of decline due to drought, development and excessive groundwater pumping.But don't expect the water flow and quality to improve overnight.Tom Frick, a DEP official who helps oversee watershed protection, noted after the commission meeting that the restoration work is a "multiple year effort" that will vary based upon the needs of each spring."We didn't get to this point overnight, and certainly the restoration and these efforts won't happen overnight," Frick said. "This is just one of the steps to restore the springs."Meanwhile, Sen. Andy Gardiner, an Orlando Republican who is slated to become Senate president in November, said lawmakers need to set a multiple-year work plan for water projects and land preservation, similar to the Department of Transportation's five-year work program.Such a plan may also be modeled after a proposal the Senate approved earlier this year that would have provided a long-term outline for improving the springs by seeking to control the amounts of fertilizers allowed into waterways, redirecting waste water, replacing septic systems at no charge to homeowners and having the state rank the needs of the various critical springs projects.The House never took up the proposal."It was important for the Senate to say, 'We want a long term solution,' " Gardiner said after the commission meeting. "If you have a five-year work program, like we do the DOT, I think that's good to do that for the springs and for land purchasing and things like that."Gardiner and Merritt Island Republican Steve Crisafulli, who is slated to be the next House speaker, have previously announced that water projects will be a priority of their leadership terms.The springs benefiting from this year's money include Fanning, Levy Blue, Jackson Blue, Wakulla, Volusia Blue, Silver, Wekiva, Aripeka, Chassahowitzka and Crystal springs, and springs associated with Econfina and Holmes creeks, the Ichetucknee, Santa Fe and Suwannee rivers and Lake Panasoffkee.This year's state springs funding is an increase from the $10 million set aside in 2013.The state has about 1,000 springs that face an intrusion of nitrates and increasing signs of saltiness. The state spent nearly $25 million over a decade on springs, starting in 2000, before the funding tap temporarily went dry. Scott, as part of a re-election platform, has outlined a $1 billion environmental blueprint for Florida that would include $50 million a year in funding over 10 years for the springs. But Gardiner said any future funding for the springs will depend on the outcome of Amendment 1, which goes before voters in November.The proposed constitutional amendment, backed by a group called "Florida's Water and Land Legacy, Inc.," seeks to set aside 33 percent of the state's documentary stamp tax revenues --- fees paid when real estate is sold --- for 20 years to acquire conservation and recreation lands, manage existing lands, protect lands that are critical for water supply and restore degraded natural systems."I think when we get past November, and if Amendment 1 passes, it's going to give us a diagram for coming up with something for that 33 percent of the doc stamps," Gardiner said. "Do you start by putting it in for the springs programs, lane projects, bike trails and things like that? But we also have to identify where we're already spending money. Then we can start building for the future."The amendment, which requires approval from 60 percent of voters to pass, could generate $10 billion over its life, the group says.Gardiner, who doesn't believe the funding should be locked into the state constitution, expects the amendment to pass.