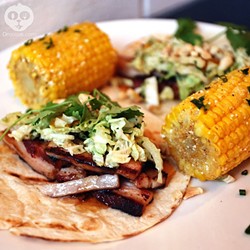 Attention barbecue lovers: Today at 4 p.m., Orlando's newest smoky spot opens up on Mills Avenue. We've been anticipating the opening of Pig Floyd's Urban Barbakoa since it was announced in November. With offerings like a barbakoa banh mi and four amazingly-delicious sounding tacos (butter chicken? Yes, please), we're almost literally counting down the hours until we can nip in for a bite.

In addition to the sandwich and taco offerings, Pig Floyd's also promises platters of meat that come with two sides and tortillas. Meats vary from standard ribs to an unusual North African chicken, sausage and shrimp plate. The sides tend more toward Latin than traditional barbecue flavors, featuring plaintains and yuca (with FANCY sauce), in addition to fries, slaw and corn on the cob.

You can check out the entire menu on Burger Beast.