This Little Underground: Stitches at Backbooth, sort of...

Stitches The Stitches show (Sept. 10, Backbooth) – or, more precisely, the show that Stitches was supposed to play – has been lighting up the local news and social media feeds. I was there and this is what I saw. Everything was going fine through a parade of local openers. In between all that, there was a meet-and-greet with the headlining Miami rapper, which doesn’t sound especially gangster to me but whatever. Regardless, because of his lurid mythology, Stitches did come into town amid some buzz and anticipation. Between the unfiltered edge of his trap lyrics and the provocative conviction of extreme face tats that stretch his mouth into a wicked smile that’s half-Joker, half-Leatherface, there wasn’t one person there who didn’t hope to witness some sort of craziness. But that was expected to come from the stage, not the crowd. Well, that script got flipped. Now when it comes to concert assholery, the range of inconsideration typically covers over-talkers, view-blockers and, according to editor Ashley Belanger, tit-jabbers. But at some fringe shows, it exists on another level. Probably all of us at this show were expecting some sort of fireworks, but I guarantee none but the perpetrators were expecting literal goddamned fireworks. But that’s exactly what happened before Stitches even took the stage. Someone thought it would be cute to fire off some high-grade firecrackers into the crowd. I couldn’t tell if these were something like M-80s or whatever, but they sure weren’t lady fingers. The burns on my arms from the hot flying pieces can attest to that. After a volley of big pops, the room immediately filled with smoke, the fire alarms signaled, the lights went up, the firefighters arrived and the show was called. The good news so far is that I’ve only heard reports of minor injuries, and mine aren’t anything that a little tube of Neosporin won’t fix. Unfortunately, it was a juvenile act that was done with big-boy ammo, and that could’ve resulted in a very lopsidedly serious outcome for a dick move. But, really, this was just a stupid, small and self-defeating stunt. So let’s throw a little sobriety on some of the eager reporting out there: This incident is neither connected to nor to the degree of all the other truly bad shit that’s been happening lately downtown. Still, it sure isn’t helping. Grow the fuck up, people. There’s some video out there on the aftermath: http://www.youtube.com/watch?v=XExjeb8_lko I haven’t yet seen any video of the actual incident, but this, courtesy of Arts & Culture editor Jessica Bryce Young, was basically it, only with much better wardrobe: http://www.youtube.com/watch?v=W_x4iF7egNc&t=3m43s And since few of us got to actually see him, here’s some footage of Stitches and his crew on their way out, courtesy of fellow OW contributor Dave Plotkin: 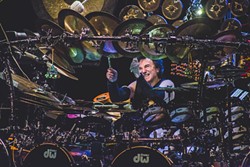